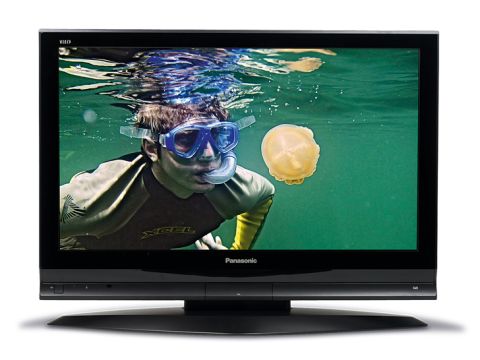 The 42PX70 is certainly no oil painting, but it does mostly hit the mark with its connections

This screen is comfortably the cheapest 42in plasma we've ever seen from Panasonic. Which is great, of course, provided we don't find that too many corners have had to be cut to reach the sub-£1k price.

The 42PX70 is certainly no oil painting, with its slightly drab dark finish and uninspiring lines. But it does mostly hit the mark with its connections, thanks to its two HDMIs, component video input and PC port. Just be warned, though, that there are no RCA composite video or four-pin S-video jacks.

Heading up the features is its V-Real 2 image processing system. Included within this is upscaling to 1080p; a wealth of noise reduction options; colour management and contour enhancement.

Other key specifications include a terrific claimed contrast ratio of 10,000:1, a 1,024 x 768-pixel resolution and receipt of 1080p/24fps video via HDMI. Please note, though, that while it accepts such pictures, it does so without any accompanying sound.

Plasma may be struggling to keep up with LCD in hard sales terms, but on the evidence of the 42PX70, it's still a highly relevant technology when it comes to performance.

The 42PX70's good news begins with its truly outstanding black level response, which plumbs depths far in excess of anything our LCD rivals can muster. What's more, the subtlety of colour nuance and detailing in dark areas helps them look three-dimensional and natural rather than flat and hollow.

Good black levels are usually accompanied by good colours, and the Panasonic lives up to this with a delightfully wide and subtle palette that's for the most part impressively natural in tone, too.

HD images look reasonably (though not spectacularly) sharp, meanwhile, and thanks to plasma having a way better response time than LCD, this sharpness isn't diminished during action scenes by motion blur.

As a final key strength, the 42PX70 is more comfortable showing standard definition than most of its rivals - an important point given that HD material is still in relatively short supply in the UK.

In an ideal world, the 42PX70 would portray slightly less orange-looking reds, would suffer slightly less with judder during HD camera pans, and would have more powerful audio. But in the budget world the 42PX70's £1000 price tag means it belongs to, these problems are so insignificant we're almost embarrassed we mentioned them.