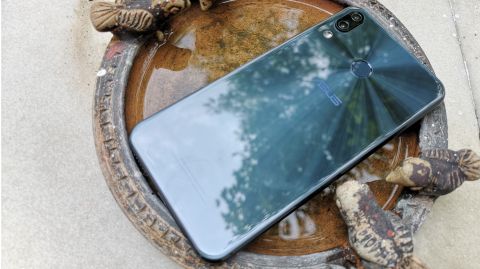 The Asus Zenfone 5Z is a value-for-money flagship phone, if there ever was one. It offers features that are at par with the OnePlus 6 and, to a certain extent, the Samsung S9 Plus, but at a cost that is much lower.

The Indian market’s become as such that brands aren’t afraid to name their competition. And, Asus isn’t shying away from claiming that its new flagship device is superior to the OnePlus 6. To be fair, the Asus Zenfone 5Z looks like it packs a punch. In fact, at a price of Rs 29,999, it offers incredible value for money.

All three are available in either Midnight Blue or Meteor Silver.

Launching on July 9, users can avail a Rs 3,000 cashback using ICICI credit and debit cards, both. And Jio customers can get an additional Rs 2,200 cashback along with 100GB of data.

This is, in a lot of ways, one of the best displays that Asus has launched. It’s not washed out, the colors are crisp and the LCD seems to do justice to the 6.2-inch screen with a 19:9 display.

And, the 90% screen-to-body-ratio is enough of a delight that you easily ignore the chin of the phone where the bezels do stand out.

But, none of that will matter if you’re out in the blazing sunlight unable to see your screen. Fortunately, the Asus Zenfone 5Z doesn’t fail in that department either. Visibility seems to be on-point at all angles and sun, or no sun, the screen is bright enough.

So, when you finally take the phone in your hands, the first thing you notice is how it’s much lighter than you expect it to be. But in the next instant, you’re pulled back to reality where you notice is how, even though it’s so light, you still need both your hands for functionality.

Asus has employed both the trends in the flagship space with the notch and glass back. Both trends, we feel, are controversial and have yet to prove themselves. For starters, glass backs look good but they’re much more fragile than aluminium. Their utility comes in when you’re talking about wireless charging, but since that isn’t a feature on the Asus Zenfone 5Z, I’m left wondering what purpose the glass back really serves except to ‘look good’.

That being said, Asus has incorporated the notch where, should the user choose, the phone can also become notch-less. Yes, it’s basically what OnePlus has employed on the OnePlus 6 as well.

The notch on the iPhone X serves a particular purpose. But, when other brands employ the same design feature, they have yet to explain why. There has to be more to it than bezel-less perfection.

The craze over Stock Android is understandable, but Asus does a fairly decent job with their own user-interface (UI) as well. Artificial intelligence (AI) has been integrated into every aspect of the phone’s functionality, from grouping pictures in your gallery to suggesting what application you’re going to use next. They’ve taken full advantage of the Qualcomm Snapdragon 845 processor’s AI engine.

The interface itself is smooth and has functioned without any lags so far. In fact, if you’re a fan of multiplayer games, the interface has been tailored for ‘immersive’ gaming, specifically keeping PlayerUnknown’s Battleground (PUBG) in mind.

Even switching the phone on and off isn’t a tedious task since it boots in a matter of seconds.

With respect to security, it has face and fingerprint unlock along with the usual security features. The only thing is that if your hands are little small, reaching the fingerprint sensor around back might be a little bit of an issue.

If Asus phones were to choose one unique selling proposition, it should be the audio quality that comes on their phones. The Asus Zenfone 5Z apparently has a new ‘five-magnet’ speaker that promises louder volumes and lower degrees of distortion.

But the best part, for us, is that it retains the 3.5mm audio jack. Honestly, we’ve never understood why brands thought it was okay to take that feature away when it serves such an integral purpose.

Here’s what we have an issue with though. Artificial Intelligence (AI) is all well and good, but why do you need to have adaptive ringtones? If a person isn't up in the morning, they need their phone to be loud. It's only logical that they'd want to wake up when their boss is calling instead of their phone making the judgement call where the surroundings are too quiet, so the ringtone should be at a quiet volume as well.

This is one feature of the phone that seems particularly exciting to us, though a little more time with the phone will tell whether or not it’s really up to the mark that Asus claims to achieve. It has the flagship dual camera setup in a vertical format with a 12MP main camera and secondary 8MP wide-angle lens.

So far all the of pictures that we’ve clicked in natural light have had balanced exposure, accurate color reproduction and sharp edges. Even indoors, under artificial light, the camera performed well but, it’s image stabilization seemed to be lacking. Or perhaps, we were just jumping too much.

Since AI is the new buzzword that brands are following (not their fault, it’s consumers demand), even the battery on the Asus Zenfone 5Z has ‘smart charging’. It supposed to double the battery life that you’d normally get out of the phone.

Longevity isn’t a feature that can be tested in the short amount of time that we’ve had the phone, but what we can check is how long it takes to charge.

And quite honestly, so far, so good. It charges in a jiffy thanks to QuickCharge 3.0 and what Asus calls the ‘BoostMaster’.

It's fairly obvious that the Asus Zenfone 5Z is packed full of features, and like they've reiterated time and again, full of 'AI capabilities'. Regardless of the AI, the phone has plenty under the hood to justify its price.

In fact, it's probably one of the few flagship phones in the market that could be deemed 'worth it' where the user comes away feeling as though they've gotten more from their phone that they paid for.