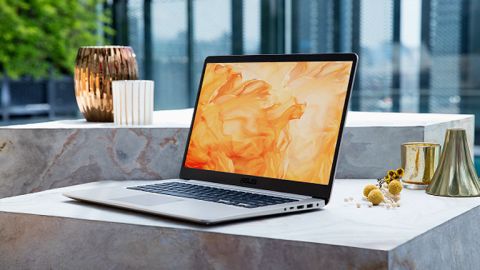 The slimline design of the VivoBook S15 makes it one of the most portable 15-inch laptops around, while its strong Intel Core i7 performance ensures that it can handle everything except heavy-duty gaming.

The Asus VivoBook S15 is one of the best recent laptops we've tested. They say that ‘less is more’, and the trend with laptops in recent years has certainly been moving towards ultra-portables with ever smaller and lighter designs.

Sometimes, though, you still need a nice big screen to play with, whether it’s for number-crunching spreadsheets at work, a spot of close-up photo-editing, or just watching Stranger Things on Netflix.

The VivoBook S15 from Asus fits the bill nicely, combining a large, bright 15.6” display with strong processor performance and a slimline design that still allows Asus to describe it as an ‘ultra-portable’.

There’s a rather confusing range of models (and gobbledygook model numbers) available for the VivoBook S range, including both 14-inch and 15-inch screen sizes and i5 and i7 processors.

There are also models with either Windows 10 Home or Windows 10 Pro for business users. However, Asus complicates matters somewhat as most of these models aren’t actually available from its own online store, so you’ll need to track the VivoBook down through Amazon and other online retailers - with the i7 model that we review here being primarily sold through Currys in the UK.

However, we tested the top-of-the-range model, which includes a quad-core i7-8565U running at 1.8GHz (up to 4.6GHz with Turboost). That model also doubles the solid-state drive to 512GB, and includes 32GB of Intel’s high-speed Optane memory to enhance performance ,while still keeping the price down to a competitive £889 (around $1,200, AU$1,700).

Both models share the same 15.6-inch HD display (1920x1080), although the i7 model reviewed here also sports Asus’ ScreenPad 2.0, a somewhat unusual trackpad design that doubles up as a miniature touch-screen for controlling the VivoBook and various apps.

Despite its 15.6-inch screen, the VivoBook is still highly portable, weighing just 1.8kg and measuring a sleek 18mm thick.

Admittedly, it does seem quite hefty when compared to lighter 12-inch and 13-inch laptops, but getting any 15-inch laptop down to less than 2kg is an impressive feat, so Asus has certainly done a good job with the design of the VivoBook S15.

And, despite the powerful i7 processor, the laptop ran cool and quiet throughout all our tests, even when running heavy-duty graphics benchmarks.

It’s nice and sturdy too, thanks to its aluminium casing, which is available in silver, green, and ‘punk pink’ - clearly aiming at the ‘yoof’ audience. Asus also pays nice attention to detail, with features such as the screen hinge that gently tilts the keyboard up at a slight angle as you open the screen.

The keyboard itself feels firm and responsive for speedy typing, and the size of the screen means that there’s room for a proper numeric keypad, and a comfortably large set of navigation (arrow) keys as well.

Our only minor complaint here is that the silvery gloss on the keys doesn’t highlight the characters on each key very well, even with the backlight turned on. That’s not too much of a problem when you’re typing with the larger QWERTY keys, but we sometimes found it tricky to see the icons on the smaller Function keys for adjusting brightness and other settings.

One limitation with many smaller laptops is their reduced connectivity, but the size of the S15 means that there’s plenty of room for a variety of ports and connectors.

There are two USB 2.0 ports on the left-hand edge, with one USB 3.1 and one USB-C over on the right. The right edge also houses a microSD slot for memory cards, 3.5mm audio connector and HDMI for connecting to an external monitor.

The VivoBook S15 also scores bonus points for being one of the first laptops we’ve come across that supports the new Wi-Fi 6 standard (aka 802.11ax).

The main reason for buying the VivoBook S15 is, of course, its large display, and although the display is limited to standard HD (1920x1080) resolution, that’s an acceptable compromise for a laptop in this price range.

We found the display very attractive too, producing a clear, sharp image with bold, bright colours for displaying video and photos. We were impressed by its viewing angles too, which ensured that the screen remained clearly visible through almost a full 180-degrees, so the VivoBook S15 will be a good option for sharing photos and videos with friends, or impromptu presentations if you’re travelling on business.

And while the Harmon Kardon stereo speakers aren’t exactly Hi-Fi quality, they do manage to avoid the thin, tinny sound that afflicts many laptops, so the sound quality of the VivoBook S15 is perfectly adequate for watching video or listening to some music on Spotify.

The ScreenPad is a bit of a mixed bag, though. You can use it as a conventional trackpad, but it can also act as a small touch-screen, giving access to a number of additional features, such as a Handwriting app that can convert finger scribbles into text, and a Quick Key app that lets you automate commands such as Cut/Copy/Paste.

But even after a few days we never found the ScreenPad to be particularly intuitive to use and - like the Touch Bar on Apple’s MacBook Pro - it seems to be an answer in search of a question.