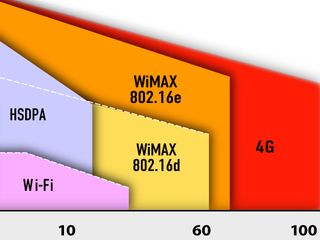 The wireless landscape according to the WiMAX Spectrum Owners Alliance. Units in Mbit/s

The standards body for wireless networking is looking to develop a new high-throughput version of WiMAX, the long-range wireless standard.

The new standard, proposed as 802.16m, could push throughput over the Gigabit per second (1Gbit/s) barrier. However, it seems the Institute of Electrical and Electronics Engineers ( IEEE ) envisages a 2009 timeframe for the new standard.

And, given that organisation's distinct lack of dynamism in terms of 802.11n wireless, it's no surprise this timeframe seems a little far-fetched.

802.16m could borrow from 802.11n, though, with multiple-input multiple-output (MIMO) antenna technology also set to be used.

It has also been suggested that 802.16m could integrate with 4G cellular phone networks - enabling a single platform to push out content to devices. Such a solution could even be used for IPTV on mobile phones and certainly Video on Demand (VoD). The graphic we've displayed is from the WiMAX Spectrum Owners Alliance and shows the roadmap of the wireless space. You can also see the full version of this.

The basic 802.16m specifications are shown in this PDF .