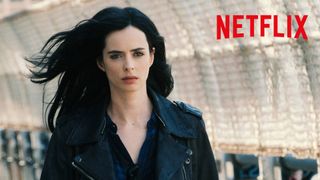 It's official – your butt will not be leaving your couch in 2016, with Netflix's announcement of premiere dates for a stack of upcoming original shows, as well as a confirmed cast for the new entry in the Black Mirror series, and the announcement of a second season of Marvel's Jessica Jones.

The new Black Mirror episode will star Gugu Mbatha-Raw (Doctor Who, Beyond the Lights) and Mackenzie Davis (Halt and Catch Fire, The Martian) and will be directed by Owen Harris (Kill Your Friends).

Not much is known about the second season of Marvel's Jessica Jones at this point, though you can expect (most) of the first season's cast to return.

Get down with some funky release dates

The hugely anticipated new series The Get Down, from Baz Luhrmann (Moulin Rouge!, The Great Gatsby) and Shawn Ryan (The Shield) now has a release date, with Netflix announcing that it will be arriving on the service globally on August 12, 2016.

The first six episodes of the series will chronicle the birth of hip-hop in New York's South Bronx during the late 1970s. Expect it to feel totally legit, as hip-hop pioneers Grandmaster Flash, DJ Kool Herc, and Afrika Bambaataa are part of the show's creative team (each will also be portrayed on the show).

Check out the amazing trailer for The Get Down below:

Doing time isn't fun for anyone, but we're happy to see the ladies of Litchfield do a little more of it with the announced fourth season of Orange is the New Black, coming to the service on June 17, 2016.

Check out the new teaser for season 4 below:

Fans of Ellie Kemper and her wonderful series, Unbreakable Kimmy Schmidt, will be happy to know that Netflix has announced a second season of the comedy, arriving on the service globally on April 15, 2016.

Grace and Frankie is also set to return, with its second instalment landing on the service globally on May 6, 2016.

And, though its date has already been announced, the fourth season of House of Cards will be arriving on Netflix in its entirety on March 4, 2016.

A slate of new Originals are on the way

It would seem that Will Arnett is pretty popular around the Netflix offices, as he's getting a third Netflix Original series to go along with Arrested Development and BoJack Horseman in Flaked, a "serio-comedy" in which a man in Venice, California must stay ahead of his own lies. The show will arrive globally on March 11, 2016.

Netflix is also getting a new sitcom starring Ashton Kutcher in The Ranch, which sees Kutcher return home to his family's Colorado ranch after a failed semi-professional football career. The multi-camera comedy also stars Debra Winger, Danny Masterson (who worked with Kutcher on That '70s Show) and Sam Elliott, and will launch on April 1, 2016.

Set in the South of France, Marseille follows mayor Robert Taro (Gérard Depardieu) as he heads into the city's municipal elections, and his last-ditch attempt to push through the vote on a casino in its historic Marina. You can expect an intense political power struggle when the show arrives globally on May 5, 2016.

Stranger Things, starring Winona Ryder, is an 8-part Netflix Original series focused on the disappearance of a young boy in a small town in Indiana. As the search takes place, family, friends and local police are drawn into a mystery involving supernatural forces and top secret experiments.

The show, which is described as a "a love letter to the '80s classics that captivated a generation" premieres globally on July 15, 2016.

A new show from Judd Apatow (Freaks and Geeks, Girls) is set to arrive on Netflix soon in the comedy Love, starring Gillian Jacobs (Community) and Paul Rust (Comedy Bang! Bang!). The show follows the pair as they "navigate the exhilarations and humiliations of intimacy, commitment, love and other things they were hoping to avoid," and will arrive globally on February 19, 2016.

Check out the hilarious trailer for Love below:

Netflix is kidding us

Along with all the other sweary, adult shows listed above, Netflix is also bringing a trio of new kids shows to its lineup.

Word Party is a vocabulary building show for preschool-aged children from The Jim Henson Company, and will arrive on the service globally on June 3, 2016.

Tweens will get Lost & Found Music Studios – a show about talented teenage musicians as they navigate the music industry. You can expect plenty of singing and teen angst when the show arrives globally on April 1, 2016.

And finally, King Kong is back in the new animated series from regular Marvel producer Avi Arad, Kong: King of the Apes. The famous gorilla goes bananas on San Francisco's Alcatraz Island, and robot dinosaurs are called in to take him down. The show premieres globally on April 15, 2016.