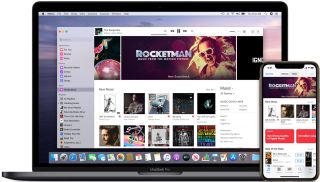 Apple has officially killed iTunes in macOS Catalina, and the company has now revealed more details about the apps that will replace it.

It has released a new support document aimed at answering any questions iTunes users have about the imminent closure of the app and how the three replacement apps – Music, Podcasts, Books and TV – will work.

Music to our ears

People primarily used iTunes to listen to and purchase music – as well as to import music from CDs. According to Apple, all the music you’ve bought or imported will appear in the new Apple Music app, and any playlists you’ve carefully curated will also be imported.

If you’ve got an iTunes gift card or unspent iTunes credits, then the good news is that they can be used in the new apps as well.

The iTunes Store doesn’t seem to be going anywhere either, and will still sell music on iOS, Mac, PC and Apple TV devices.

In macOS Catalina, the iTunes Store can be accessed through the Sidebar in the Apple Music app.

You can also subscribe to the Apple Music streaming service through the app – and if you do, you can hide the iTunes Store to simplify things.

As expected, Movies and TV shows you’ve either bought or rented through iTunes will now be found in the new Apple TV app.

It seems while the iTunes Store will still exist for music purchases, for TV and Movies you’ll need to use the new TV app.

Any podcasts that you have subscribed to via iTunes will now appear in the new Podcasts app, and audiobooks will be imported into the Apple Books app. You’ll need to use the Books app to buy any audiobooks in the future.

Perhaps one of the most pressing questions people had when they heard about the imminent death of iTunes was how would they be able to sync their devices, including iPhones, iPads and iPods.

Apple has confirmed that this will all be handled in Finder – so you’ll see your plugged-in devices from within the Finder app, and will be able to backup and sync those devices. According to Apple, it will also be easier to drag and drop files for quick transfers as well.

From the screenshots Apple has provided, it looks like iTunes users will find the new apps very familiar, so hopefully it won’t be too difficult to adjust to using them.

However, it remains to be seen if splitting iTunes into separate apps is a wise move – or will simply complicate things needlessly.