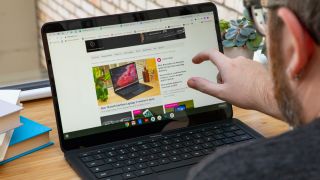 Google has at last released Chrome OS 78 to Chromebooks, scheduled to land this week on the wide range of Chromebook laptops in the wild today, bringing some major new features.

Those new features bring Chromebooks – like Google’s brand-new, Editor’s Choice award-winning Pixelbook Go – much more in line with the more established macOS Catalina and Windows 10 operating systems (OS). For instance, the marquee change here is the introduction of virtual desktops to Chrome OS.

This allows users to hide away open apps into virtualized versions of their own desktops, creating discrete environments according to whatever they wish, whether that be projects or entertainment tasks. And, it appears to work much in the same way that it does on those competing OSes.

Send numbers to your phone, and print more easily

Google has also implemented a new feature that will allow you to more easily make phone calls while browsing the web. That is, so long as you have an Android phone connected to the same Google account as your Chromebook.

When this feature is set up, you’ll have the option to take phone numbers that appear in Google search results and on web pages and send them to your Android phone with a right-click. No longer will you have to copy the number down or dial it into your phone while looking at the Chromebook display. It will, at the very least, be a minor time saver.

Finally, Google has both reduced the number of steps required to set up printers with your Chromebook. First, pressing Ctrl + P on your keyboard brings up a new printer menu to sets that compatible printer up with a single click. Then, you can now easily set up a default printer through the Chrome OS settings pane.

Bonus: you can now also share feedback about Chrome OS directly to Google more easily. There’s a new button for the function placed directly beside the “Power off,” “Sign out” and “Lock” functions when you press and hold the power button for one second named “Feedback”.

Google’s latest Chromebook, and every Chromebook before it, just got a whole lot more useful and that much closer in functionality to its rivals.