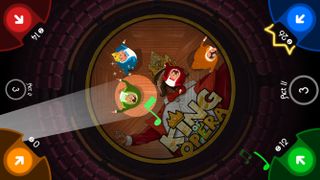 Technology gets a bad rap when kids hunker down into their own little worlds, hunched over glowing screens, blocking out all conversation. But throw a game into the mix and smartphones can help people connect and bond with family members and friends.

We’ve compiled a list of our favourite family-friendly multiplayer games. The selection includes local same-device multiplayer titles, some that require you to be armed with your own smartphone, and a few with turn-based systems that enable you to have fun with friends and family on the other side of the world.

A few are a bit involved, but most are intuitive enough even for gran to play – and all of them are, of course, actually lots of fun.

It's a vintage title, but the world’s most popular mobile word game is one that, let’s face it, is an awful lot like Scrabble.

In other words, you get a selection of tiles, plonk them down on the board, aiming to make use of bonus squares (to double/triple the scores for relevant letters or words) and rack up big points.

One of the major benefits of Words With Friends is that it works fine even on fairly old hardware. It’s also suitable whether everyone’s in the same house or the players are peppered about the planet.

In the latter case, in-game chat provides additional bragging opportunities when you lay down a particularly epic word to swing the balance of the scores completely...

Chances are Auntie Mabel’s not going to fare well against little Jimmy in the latest FIFA or Madden.

For a great equaliser in virtual one-on-one sports, try unhinged basketball effort Dunkers instead, on the basis that it’s nigh-on impossible for anyone to control.

Two characters face off, their arms whirling maniacally. Each player gets two buttons, one of which flings their on-screen avatar forwards and into the air, and the other of which moves them backwards.

For no obvious reason, a trampoline sometimes appears on the court.

Games are fast, frenetic, very silly, and only need one device. Also check out the developer’s similarly impressive Battle Golf if you’re after a fun, energetic title that levels the playing field thanks to its crazily unpredictable gameplay.

The basics are simple – set your angle and power, and then let rip. It’s like Angry Birds, but with a degree of precision control.

When it comes to multiplayer, everyone needs their own smartphone, but it doesn’t matter what system they’re running.

If people are on the same network, you can partake in frantic speed races to each hole. Alternatively, there’s a sedate asynchronous turn-based mode, for playing matches against a loved one half a world away.

The finest multiplayer multi-device party game on mobile, Spaceteam involves a lot of button-pushing and yelling. The premise is your little spaceship’s hurtling along, but also falling to bits and trying to outrun an exploding star. The only way it’ll not get boiled is by engaging relevant controls.

The snag is the instructions you receive are often not related to controls on your particular display. In no other games are you likely to desperately scream “will *someone* turn on the beveled nano buzzers?”, while frantically hunting for the ‘dangling shunter’ on any screens within view.

The app’s free, and everyone just needs to be on the same Wi-Fi network to play.

OK, maybe this is an older title in terms of the decline in interest it's suffered, but from a social perspective, this game is all about the hunt – and that occurs outdoors.

A great deal of Pokémon Go is about battles between tiny creatures, who duff each other up to reign supreme over Pokémon Gyms liberally sprinkled about your local neighbourhood.

As long as one or more people have the game installed and a GPS signal, they can roam the streets with smartphones, finding elusive Pokémon and capturing them by flicking Poké Balls their way. Subsequent legwork can bolster a collection of critters by hatching eggs.

It’s all very simple, and it’s different to the other games here in that it’s not a shared experience in game but in real life - and it gets everyone out of the house. Who knew hunting cartoon monsters would be a great way for family members to bond while simultaneously getting some exercise?

This one’s essentially a digital take on that old party game where you hold a piece of paper to your forehead with something scrawled on it and have to guess what it says from your friends’ clues. The difference with Heads Up is that everything’s played at speed – and it only requires a single device.

The way it works is you select a category and then hold the phone to your forehead so everyone else can see the screen. Get the answer right and you flip the phone down to get a new card. (You can also flip it up to pass.)

An added twist is using your phone’s camera to record everyone else as you play, providing ample ammunition to embarrass relatives when they offer the most inane clues in history.

There’s a Minecraft vibe about The Blockheads, what with its chunky visuals. Only this is a resolutely 2D blocky world, within which you explore, dig, and build, ensuring your little avatar remains well fed and rested, and doesn’t become annoyed at your inability to help them survive.

It’s very sweet, and the kind of engrossing game that can rob days from your life. But The Blockheads excels when you invite friends along for the ride, bringing them into your virtual world in a persistent multiplayer adventure.

One thing to note: local servers can be set up for free, but online worlds require payment – seven days costs 600 gems – about $3/£2/AU$4 of in-app purchases.

Undoubtedly the most involved of the games in this list, Catan is a multiplayer boardgame based around building settlements, managing and spending resources, and trading.

(For the videogame-obsessed, it’s a bit like a tabletop take on Civilization.)

If you’re in the same room as actual humans who are also fans, go for the real-life boardgame.

But Catan on mobile gives you the means to battle online (regardless of platform), with the added advantage you needn’t set up the board, nor deal with someone getting in a huff when performing badly, and flipping everything onto the floor.

In this same-device two-player game, you and a friend or family member battle it out in fast-paced minigames.

Among the odd bit of traditional fare (tap-based track hurdles; tic tac toe), there are decidedly weirder games, such as smacking ancient phones the second they holler, and steering little cars about to paint the floor in your colour.

Not all of the games are intuitive, but they only last a minute or so before you’re on to the next. The clever bit, though, is player avatars integrating selfies, so you can see yourself on screen grinning when victorious or looking suitably grumpy on defeat.

For free, you get five games to play, where in-app purchase unlocks another 39.

As if it’s not comical enough having four people hunched over a smartphone to play a game, King of Opera’s ridiculous nature makes for fun family entertainment.

It’s also intuitive, given that the goal is simply to keep your tenor in the spotlight. Everyone else’s aim: knock them off the stage and grab the spotlight for themselves, like operatic sumo.

Where King of Opera really clicks is with the controls, which are simple enough for anyone to quickly understand: each singer spins on the spot, and when a player’s button is pressed, their chubby superstar trundles forwards, to make their play for the limelight.

This article is brought to you in association with Tesco Mobile