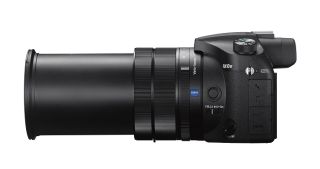 Extending its Cyber-Shot line-up today, Sony announced the RX10 IV camera in India. The camera claims to deliver an unmatched combination of mobility and speed for photography enthusiasts and professionals looking for the ultimate ‘all-in-one’ solution. Priced at Rs 1,29,990, the camera will be available from October 14 on all Alpha flagship stores and major electronic outlets.

The camera features a 1.0-type 20.1MP Exmor RS CMOS sensor with DRAM chip along with a BIONZ X image processor and front end LSI. It also has 24-600mm zoom lens with f2.4-4 aperture range, which promises to offer high quality images and video when combines with the given sensor and image processor. The quality of the images and the videos further gets enhanced with the high focusing speed of 0.03 seconds which ensures that all the subjects gets captured with precise detail and clarity.

The lens also has built-in Optical SteadyShot image stabilisation that helps to reduce camera shake and image blur. To improve tracking and focus accuracy, the company has equipped the camera with high density tracking AF technology.

Also, the camera comes has a hybrid AF system with 315 phase-detection AF points and offers continuous high speed shooting at up to 24fps with full AF/AE tracking. This can buffer up to 249 images at a time. With the significant improvements in processing power for the new camera, EVF display lag during continuous shooting has been reduced, allowing shooters to capture the decisive moment with ultimate confidence. Also, for convenience during image playback, continuously shot images can be displayed in groups instead of individual shots.

The camera is also dust and water resistant and comes with in-built Wi-Fi, NFC and Bluetooth connectivity.