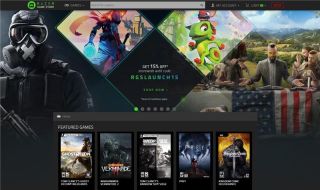 Razer is getting into the business of selling PC games with its very own Razer Game Store.

Launching globally today, Razer is kicking off the grand opening of its Game Store with up to 75% off Ubisoft titles including Assassin’s Creed Origins, Watch Dogs 2, Far Cry 4, South Park: The Fractured but Whole, and Tom Clancy’s Rainbow Six: Siege. Additionally, users will find plenty of other popular games from other publishers such as Grand Theft Auto V, Cuphead and Dishonored: Death of the Outsider.

In case you’re worried Razer just created yet another EA Origin or Ubisoft UPlay, the online store is a portal more akin to Humble Bundle, and all purchases are delivered in the form of Steam or Uplay product keys.

All game purchases made on Razer’s Online store will also come with rewards, including earning zSilver – Razer’s virtual currency – for every item, Razer Game Store vouchers, and discounts on gaming gear from Razer’s regular online site.

Razer also promises to have a weekly rotating selection of four games discounted up to 50%, earning double zSilver rewards upon purchase, a Razer Game Store voucher of up to $15 and a $10 voucher on Razer peripherals purchased on the Razer Store. The first week of Razer exclusive deals will include Far Cry 5, Assassin’s Creed: Origins, Ni No Kuni II: Revenant Kingdom, and Wolfenstein II: The New Colossus.

As the last piece of the launch week festivities, Razer is also giving away 10,000 steam keys for Furi when you sign-up through its website.