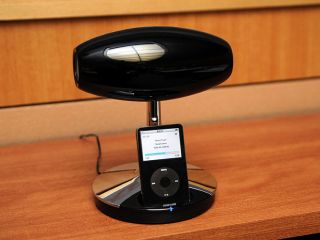 Adding external speakers to portable music players like iPods or even mobile phones is a dubious prospect at the best of times (an accessory too far?), but at least the new set from Logicool has a little extra to offer.

The Japanese company's ¥18,800 (£97) PF700 wireless speakers use Bluetooth to hook up to whatever source you have – obviously, not an iPod in this case – to relay the tunes to all and sundry.

So far, so boring, but where the pricey system might just have a chance of winning acceptance is in its built-in speakerphone function.

Assuming a phone is at the heart of things, the PF700 can detect an incoming call and start a conversation automatically. Best of all, it even has a pretty decent noise-cancelling microphone to explain the high price.

Although the full tech specs aren't official yet – the PF700 launches next week – we do know that it weighs 450g and will run for 12 hours on a charge taken either from USB or an AC source.