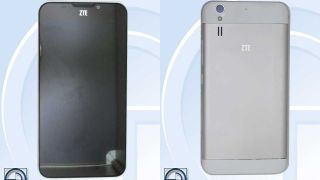 After much speculation and some media leaks, we can finally confirm that the ZTE Grand S II is the real deal and will be appearing at CES 2014.

ZTE has announced its second-generation flagship smartphone, touting that it features the latest in intelligent voice control tech. The additional voice command upgrades will enable recognition unlocking and voice-to-phone photography, similar to snapping a photo with Google Glass.

Beyond the audio features, if a Chinese telecom certification is to be believed, the ZTE flagship will also feature a large 5.5-inch 1920 x 1080 screen backed with the Qualcomm's Snapdragon 600 chipset and 2GB of RAM. The phone could very well come with an 8MP rear camera as well.

Beyond the Grand S II announcement, ZTE said it has even more lined up with two other handsets named the Nubia 5S and Nubia 5S mini.

The Nubia 5S features a 5-inch 1080p FHD display from Sharp and 13MP camera with a Sony RS sensor. The camera is particularly tuned for photography with a F2.0 aperture and DSLR-like photo options, plus 4K Ultra HD video capture.

In partnership with Aio Wireless, ZTE plans to bring out the Sonata 4G, a seemingly mid-tier phone with 4-inch screen. Other specs include the 1.4 GHz Dual-core Qualcomm Snapdragon 400 processor, 1GB of RAM, 1,780mAh battery, and a 5 MP camera for 720p video capture.

Plus a tablet, smartwatch and projecting hotspot to boot

ZTE is also set to debut its very first Iconic Phablet at CES. That's not word play - Iconic is actually the name of the device.

The Chinese smartphone company wants to make a splash with a 5.7" HD screen device that straddles the line between phone and tablet. It's listed to come equipped with a dual-core processor, Dolby Digital Sound, and a wireless charging feature.

In another first, the ZTE BlueWatch will be the Chinese phone maker's inaugural smartwatch.

The wrist-worn device features a built-in pedometer as it records and analyzes data around the clock to give users access to essential "quantified self" information like body fat percentage.

Curious and curiouser, ZTE has a hybrid Wi-Fi hostpot that can double as a mini projector. Called Projector Hotspot, it will provide 4G connectivity for up to eight devices whilst streaming video and images wherever it goes.

Finally ZTE said it is working in tandem with AT&T to develop the US carrier's Wireless Home Base. It's a device that allows users to connect their home telephone to AT&T's wireless network instead of a telephone jack. For $20 (about £12, AU$22) a month, callers will receive unlimited local and long distance talk time.

Stay tuned to TechRadar as we take our first spin with these products at CES 2014 next week.