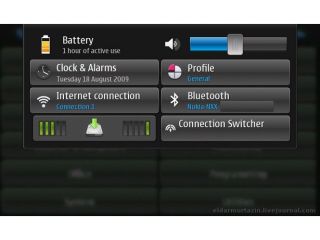 A new screenshot of Nokia's Maemo 5 OS has surfaced, prompting speculation it may be getting a sneaky release at Nokia World next month.

Admittedly, the speculation is from us, but given the leak has come from respected Russian journalist Eldar Murtazin, it means there's more than a modicum of truth to the shot.

The picture has a lot of high end S60 elements to it, but it's clearly the evolution of Nokia's 'other' OS Maemo, currently used on its Internet Tablet range.

There's a hope the new OS could be used on an upcoming device (we're hopeful the N900 could be coming sooner rather than later) bringing more advanced open source functionality.

This might not mean a lot to those who love a little bit of the XpressMusic range, but basically it means in the future it's likely Nokia's smartphones will be a lot more high powered and capable than before.

And we've all got to love that, right?

Via BGR from Eldar Murtazin