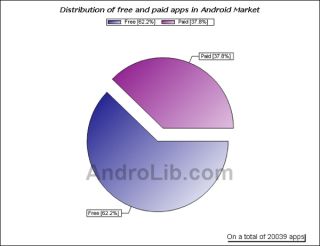 The Android Market, Google's application store for its mobile OS, has passed the 20,000 app mark.

Given Android has only been on the market for just over a year, adding 20,000 new bits o' software in that time frame is a pretty good stat.

Admittedly, the App Store from rivals Apple has over 100,000 applications on its books, and had 50,000 in its first year alone.

But it shows that Google is quickly asserting itself as the second biggest application store in the mobile arena.

And what differentiates the Android community from its iPhone counterpart is that while the Apple offering contains nearly 70 per cent paid-for apps, the Android version has only 37.8 per cent.

What that means - well, we're no statisticians, but we'd imagine that developers, given a freer rein in terms of acceptance to the Market, are happy to create apps for fun and throw them out to the wider community.

Of course, some will argue that other operating systems have a wider catalogue thanks to legacy apps (Symbian and Windows Mobile come to mind) but they're not in a nice, easy to get to central portal - and that's what the normal mobile user is looking for when adding to their shiny new phone gadget.