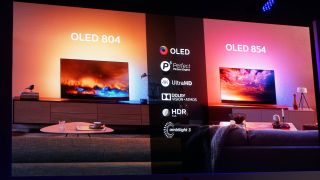 While January’s CES tech show was the stomping ground for the majority of TV manufacturers looking to show off their 2019 wares, Philips (which doesn’t distribute its screens in the US) kept its powder dry, waiting for its own showcase in Amsterdam to reveal its plans for the year. And if you’re after OLED screens and top TV audio, you’re in luck.

The company has given us a sneak peek at its latest OLED range, revealing the OLED 804 and OLED 854 displays. The 4K screens will be offering not just the full range of Dolby TV tech showstoppers in the form of support for both Dolby Vision and Dolby Atmos overhead surround sound, but will also include HDR10+ capabilities.

Philips' latest image processing system, the P5 Picture Perfect Engine, will power the show, with Ambilight 3 making colors bloom on the walls around the set to match the on-screen action thanks to a back-mounted LED lighting array.

There's not much else to go on at this stage, with Philips set to offer a full reveal of the screens' capabilities later this week at its European showcase in Amsterdam. But with top-of-the-line specs, expect the pair to come with wallet-worrying price tags.

We’ll be going hands-on with the new additions to Philips' TV range this week, so keep checking back with TechRadar for our first thoughts on the next wave of Ambilight screens.