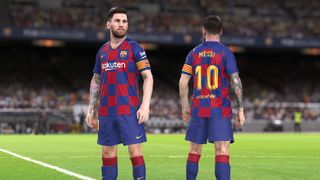 Football's coming home. And to the park. Or your commute. Anywhere really, since Konami has announced soccer sim PES 2020 is coming to mobile devices later this month.

PES 2020 on mobile sees a complete overhaul of its predecessor including new licenses, features and graphical enhancements.

PES 2020 on mobile adds a bunch of new features including a new Finesse Dribble technique, a more finely-tuned ball control system, alongside an improved realistic AI.

Players can also try out the new Matchday mode which sees you picking one of two sides at the start of each weekly event and earning points for your team.

If that's not enough, those who already own PES 2019 on mobile will be able to update to PES 2020 when it released later this month. However, Konami hasn't specified if this will be a free update. It's worth checking out the FAQs before updating your game, just in case.

PES 2020 will be available on the App Store for iPad, iPhone and iPod touch and Google Play for Android devices.