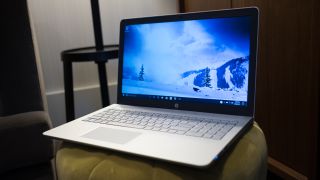 In something of a surprise, we’ve had some pretty positive news from a major firm of number crunchers regarding PC sales in Europe, which are up by a considerable amount – with laptops almost reaching a double-digit increase.

Analyst firm IDC’s first quarter of 2017 figures for PC shipments in EMEA (Europe, Middle East and Africa) show a total of 17.4 million units shipped (desktop PCs and notebooks – but not tablets), which represents growth of 1.6% compared to the same quarter last year.

That’s not a huge increase, of course, but it’s an impressively positive result when you compare it to the consistent slumping we’ve witnessed in recent years. As mentioned, notebooks did particularly well, with portables being up 8.9% year-on-year (and slightly stronger still for Western Europe in isolation at 9.2%).

IDC notes that part of the reason for the increase in sales is component shortages – we’ve been hearing a lot about SSD price hikes in recent times, for example – and folks buying now to avoid potentially paying more at a later date. Plus favorable exchange rates against the dollar have also had a considerable influence.

Unfortunately, as you might guess, the UK didn’t fare so well as the rest of Europe, as we’ve had anything but favorable exchange rates since the Brexit vote. So while overall PC shipments grew 8.2% in France, and 5.8% in Germany year-on-year, the UK saw a 7.9% drop.

Still, it’s good to get some overall positive news for Europe, and this is backed up by an optimistic sales prediction from a major notebook manufacturer last month. It’s all grist to the mill for the idea that the PC market is slowly starting to turn around…

As for individual PC manufacturers, HP Inc remained top dog with a 25.7% share of the overall EMEA market, experiencing a healthy 4.4% growth since Q1 of last year. Lenovo was in second place with a 20.6% share, followed by Dell on 12% – plus the latter experienced excellent growth of 9.8% year-on-year.

The biggest growth, however, was witnessed by fourth place Acer which managed an excellent 35.1% increase, giving it an overall market share of 9.8%, and ensuring the firm overtook Asus which slumped to 9.3% (a drop of 5.6% year-on-year, meaning it was the only major PC vendor in the red).

IDC said that Asus had a tough quarter due to “challenges related to competitive notebook price pressure and inventory”.