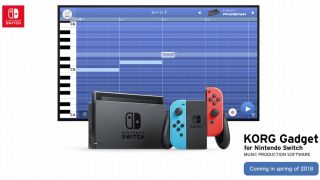 Korg, the company behind electronic musical instruments and software, has announced that it’s bringing a new music production game to the Nintendo Switch in Spring 2018.

At the moment, there’s not much information available on the title but given that it’s titled “Korg Gadget for Nintendo Switch. Music Production Software” we have fairly good idea of what its intended function is.

A sparse microsite has launched for the game which shows it’s being created in partnership with the software company Detune. According to Japanese gaming publication 4gamer, the game will work with the Joy-Con motion controls and support up to 4 players at a time.

Thank you for the music

At the moment there’s no word on pricing for the game, and there’s also no word on how exactly music would be exported from the Switch console to other platforms conveniently. According to 4gamer, "it is necessary to record output from the 3.5 mm mini pin at least in the initial state, capture the HDMI output and extract only the sound" which isn't exactly convenient.

At the very least we know it’ll be possible to share music on social channels using the Switch’s built in social features but this isn’t useful for anyone looking to quickly and easily move their music files onto a PC for further editing.

This isn’t actually the first time Korg has developed software for Nintendo’s hardware – the 3DS had its own synth app before this. It’s exciting, however, to see applications such as this coming onto the Switch too, especially because it’s a more powerful piece of hardware and its motion controls and local multiplayer capabilities could bring collaborative music-making to an entirely new audience.