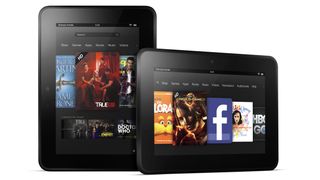 Amazon back in the black with its tablets

Teardowns of two more tablets has revealed firms are making money from their slates left, right and centre, with the Amazon Kindle Fire HD and Microsoft Surface the latest devices to be taken apart.

The folks over at IHS have taken the screwdriver to the two tablets, shortly after revealing its findings on the iPad mini, which makes Apple a not too shabby $141 (around £88/AU$136) per unit.

It's been well documented that Amazon has sold its Kindle ereaders and original Kindle Fire devices at cost price, hoping to make its money back from users purchasing books and apps on their newly acquired tablet.

However, according to the latest teardowns, the online retailer is now making a 15% profit on each Kindle Fire HD sold, which equates to about $30 (around £18/ AU$28) per tablet.

While that's not a huge margin, it's at least positive news for Amazon who will be hoping its new tablet can win over consumers looking at the Google Nexus 7 or iPad mini.

Meanwhile Microsoft will be rubbing its hands together with glee every time one of its Surface tablets is picked off a shelf, as the Redmond-based firm pockets a tidy $228 (around £142/ AU$220) for each slate sold.

The Microsoft Surface price raised some eyebrows when it was first announced, with many considering it to be too high. If the estimates from the teardowns are correct, it looks like the software giant really is in it for the money.

From IHS via AllThingsD