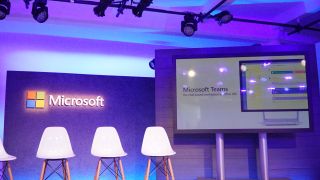 Microsoft has not been sitting idly as Slack and HipChat have become the de facto kings of online workplace collaboration. The firm has just announced the long-rumored Teams app, a familiar-looking answer to those services that leverages all of Microsoft's Office 365 apps and services.

Teams brings the entire Office 365 suite together under one app, but in a nigh-identical interface to Slack with some key improvements over that app.

An app like this from Microsoft is a long time coming, and even so, is still a ways away from general availability. Teams is available right now in a customer preview edition for the Office 365 Business and Enterprise suites on Windows 10, iOS, Android and macOS in 181 countries across 18 languages, with general availability due within the first quarter of 2017.

So, why does Microsoft hope you'll ditch Slack, HipChat or whatever your team collaboration tool is and get into the Office 365 fold?

Everything Slack can do, Teams (claims it) can do better

Microsoft Teams has the basics well covered. General chat rooms are available, as are 1:1 conversations between team members. Users can even create custom channels for specific tasks and invite individuals, and they can search across channels, team members and files – just like Slack.

Two functions we noticed that Teams has over the competition is first that, when you create a message, you can deem it as "Important" with an exclamation point symbol, alerting everyone in the channel. This in addition to just alerting channel members directly via throwing an "@" symbol next to the user's name.

Second is that Teams offers a custom polling tool to easily take team members' reactions to a given idea, subject or whatever, really. Slack can do this, but needs a plug-in first.

But, beyond this, users can format their messages either like standard chat posts in the same vein as Slack, or like miniature emails, complete with formatting and other rich features.

And, yes, GIFs and all sorts of meme tools are supported for those precious laughs during the work day.

Just like Slack and HipChat offer, Teams allows for video and audio chat through Skype for Business integration (duh). (However, this is not available yet in the mobile apps.) The app even offers helpful chat bots that seem to go beyond what Slack or HipChat provide currently.

Its T-Bot, for instance, offers help with the app itself over either chat or a browse interface, while the Teams Who-Bot can provide information about specific team members. For example, if you want to know which team member knows about, say, programmatic advertising, Who-Bot can tell you through scraping chat history that you've been a part of as well as member profiles, uploads and even emails you've been on.

But, that's just the tip of the iceberg. The key advantage of Teams is that it integrates just about every Office 365 app and service.

When a user creates a channel, they can add relevant Word documents, Excel spreadsheets and associated PowerPoint presentations right to a tab interface above the channel's chat area. You can then view the file with your fellow teammates and discuss, before moving to edit it within the proper app either locally or on your browser.

OneNote and SharePoint are integrated into the service as well, as are Power BI and Planner. The idea here is for Teams to become the hub for any professional Office 365 user, and it seems poised to do just that.

You can sign up for the Teams customer preview edition and see it in action through an interactive demo right here.