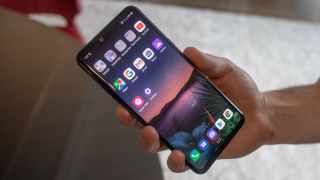 The LG G9 could be launching in February, so we’d expect rumors about LG’s upcoming flagship to start piling up soon.

But there are already a few things that we’ve heard or suspect, all of which you'll find below, so read on for hints about the LG G9 release date, specs and features.

Plus, we’ve also come up with a list of what we want – and in some cases what we don’t want – from the LG G9, to make it a substantial improvement on the LG G8 and LG G8X. We'll likely hear more in the run-up to MWC 2020, as it's likely the handset will launch during that late-February tech show.

Update: Leaked renders have revealed the likely design of the LG G9, complete with a quad-lens camera and an in-screen fingerprint scanner, while images of the LG V60 ThinQ suggest the two phones could be very similar.

The LG G8 was announced at MWC 2019 on February 24, so there’s a high chance the LG G9 will land at MWC 2020, which runs from February 24-27. It may even be announced just before that, as sometimes big announcements are made before the show officially kicks off.

For now that’s just a guess, as there aren’t any LG G9 release date rumors yet, but at the very least we’d expect it will be announced during the first half of 2020. However, there may be a few weeks or more between when it’s announced and when it goes on sale, based on past form.

The main LG G9 leak so far takes the form of leaked renders, which you can see below.

These show a quad-lens camera on the back (up from three lenses on the LG G8), along with a smaller notch housing a single-lens front-facing camera, and seemingly slimmer bezels.

The source of the images says the screen will be between 6.7 and 6.9 inches, which would make for a massive increase in size from the 6.1-inch LG G8. The G9 also apparently has an in-screen fingerprint scanner and dimensions of 169.4 x 77.6 x 8.8mm (rising to 9.4mm at the camera bump).

The LG G9 ThinQ is also shown as having a 3.5mm headphone port, but interestingly likely wouldn't have the depth sensor found on the front of the LG G8 (as there's no room for it in the notch). That in turn would presumably mean no Air Motion gesture controls or vein recognition system.

Interestingly, these images look a lot like leaked images of the LG V60 ThinQ, which might launch at the same time. Given the similar design and potentially similar release date, there might not be much difference between the two, with the V60 sure to get 5G (as all V series phones will according to LG), while the LG G9 may therefore not, making for a way to differentiate the two.

We would expect them both to have high-end power though, meaning the LG G9 ThinQ will probably use the top-end Snapdragon 865 chipset.

There are also some LG patents that could point to features of the LG G9. For example, one patent shows an LG phone with no physical buttons – a move which could free up internal space, improve the look, and allow for a slimmer handset.

The design in this patent also shows a quad-lens camera, which would be a first for LG, but which is looking likely, based on the leaked renders above.

Another patent shows a camera with a ring around it, which could be a zoom lens of some kind. Images of both these designs can be seen below.

The LG G8 is a very interesting, very flawed phone. For the G9 we want something just as interesting but without the flaws. The following suggestions could help LG achieve that.

1. Bring back the hole-less speaker….

The LG G8 has a number of experimental features, the most successful of which is arguably the hole-less vibrating Crystal Sound speaker.

This essentially removes the top speaker and causes audio to vibrate through the display instead, and it worked well in our tests. LG claims this also makes the phone more waterproof. Plus, it could help remove even more bezel, so we’d like to see the feature make a return in the LG G9.

One less-than-successful LG G8 experiment was Hand ID, a feature which allows the phone to read the blood pattern in your veins and use that to identify you and therefore unlock the handset. So it’s an alternative to a fingerprint scanner or facial recognition.

On paper it sounds cool, but in practice we found it was barely functional. But even if it worked reliably we’re not convinced that it would be much of an upgrade on the standard biometric security options, so we’d like to see this ditched.

One exciting new feature we’d like to see LG add for the LG G9 is an in-screen camera. Coupled with the hole-less speaker that could allow for a truly bezel-free design, which would be nice, especially since the LG G8 actually has quite large bezels.

4. Freshen up the design

Speaking of the design, we’d like to see that improved all-round. The LG G8 looks rather ordinary, failing to stand out from or even match many flagships visually. Getting rid of the notch would be a good start, but we’d really like a design that wows us. That would help the LG G9 make a great first impression.

The LG G8 has a 3,500mAh battery, which is on the small side by flagship standards and in our time with the phone led to predictably mediocre life. The battery pack was boosted to 4,000mAh in the LG G8X ThinQ (a sort-of successor), so there’s hope that the LG G9’s might be bigger, but 4,000mAh is really the minimum we’d want.

The LG G8 and LG G8X ThinQ both have dual-lens rear cameras, which, in the face of the triple-lens iPhone 11 Pro, quad-lens Samsung Galaxy Note 10 Plus, and penta-lens Nokia 9 PureView, isn’t very many.

Not that the number of lenses is all that matters, but it can be a good start, as assuming the lenses all do different things, a greater number can make for a more versatile camera. So we’d like to see at least one more lens on the LG G9.

As much as we tend to find LG’s smartphone innovations hit and miss, we applaud the company for trying, as it ensures its flagships almost always stand out.

We want that to continue to be the case with the LG G9, so as well as a return of the hole-less speaker, we want something new that we’ve never seen on a phone before. Granted, that often ends in as much failure (Hand ID) as successes (Crystal Sound speaker), but it's still a way for LG to stay different.