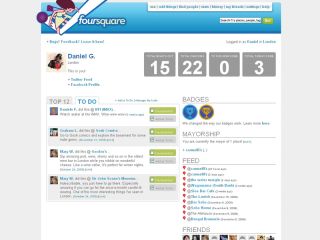 Foursquare CEO Dennis Crowley has responded to the news that Facebook is taking on location tagging with Facebook Places, insisting that a redesign and new features will keep people checking in.

Facebook Places offers many of the kind of features that has made Foursquare a hit, but Business Insider received an email from Crowley insisting that Facebook users were already well served.

"We're still a platform for location, specifically around sharing locations though check-ins, surfacing interesting things around you and using game mechanics to encourage and reward for certain actions and/or behaviours," wrote Crowley.

"Facebook also launched a location platform, which appears to be mostly based on checkins (and common FB elements like comments / likes / photos)," he added.

"I'd imagine we'll probably pull FB checkins into 4SQ too. We're in the middle of a redesign and some new feature launches, so we're going to get through those before getting started on FB integration."

Crowley also makes the valid point that Facebook photos are bigger than Flickr, but it does not make the latter any less of a successful service.

Whether there's room for two geo location tagging services remains to be seen.