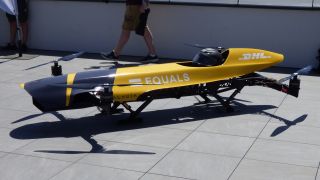 A technical glitch during a flying car demonstration sent an unmanned craft soaring hundreds of feet into the sky at Goodwood Festival of Speed in West Sussex, UK.

The car was a two-thirds scale model of the Airspeeder Mark II – a quadcopter designed for low-altitude racing at an average height of four meters.

Although the incident looked dramatic, remote operators soon regained control and brought the Airspeeder back down for a controlled landing while guests took cover indoors.

A crew member later confirmed that such a problem would be impossible in a manned Airspeeder, which is controlled directly by a pilot in the cockpit.

Airspeeder is the creation of Australian company Alauda Racing, which is creating a sports league specifically for flying cars. Alauda officially launched the new sport at Goodwood – an annual showcase of cutting-edge and historic cars – and the demo glitch did little to dampen the mood.

The Airspeeder demonstration was part of FOS Future Lab, which highlights new technology in motorsport and beyond. Alauda also used the event to unveil the Airspeeder Mark IV, which will be the world's first manned octocopter.

The first Airspeeder championships are expected to begin next year, featuring five teams and 10 pilots. Cars will fly head-to-head, reaching speeds up to 100kmph at Formula One tracks around the world.