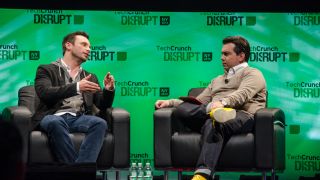 With $2 billion in the bank, Oculus VR wants to be even bigger

There's a stigma that comes with being acquired by Facebook, but Oculus VR CEO Brendan Iribe was quick to address the fears its fans might have about the social network ruining Oculus Rift's future.

"The reason we did the deal was Mark [Zuckerberg's] commitment to the vision that we have, doing it even faster, bigger and better," Iribe told TechCrunch Disrupt.

Iribe noted that thanks to the new partnership, Oculus VR can leverage Facebook's network, infrastructure and, most importantly, money in hardware research and development.

While Oculus VR has created a much-improved Crystal Cove Oculus Rift, Iribe said the company wants to push the envelope even further and, eventually, replace our vision.

"I would say mobile is the last 2D screen, based platform that will be around for a long time, but it is very mature," he said. "It's not going to get much better from where it is now kind of like the way PC and mobile OS has plateaued."

Beyond screens, Iribe believes Oculus VR will create synthetic vision, which users can hopefully put on as a pair of sunglasses.

"This is going to be what we call the final platform, replacing vision," he said.

Unlike playing a first-person shooter, watching a curved screen or even reading a book, Iribe explained that virtual reality will finally let users fully immerse themselves into an experience.

"When you look at VR and replacing vision and especially the version that really fundamentally flips the switch comfortably and puts you there, which most people haven't seen yet, but it is there," Iribe said. He even teased that Facebook's CEO has seen such a prototype device that accomplishes this feat.

Beyond games, Iribe believes VR technology can be used to create face-to-face conversations with someone over the web.

"You will believe these virtual avatars are real and you will share a virtual space with them and have conversations," he said. "You'll look at their mouth while they're talking and their eyes, going 'I know that's you but you're a cartoon or you've changed your hair, but really I know that's you.'"

While he described such a conversation as the "Holy Grail," it will take "10 or 20 years before it's realistic looking."

Along with helping Oculus push the boundaries of VR, Iribe explained that the firm's partnership with Facebook will help it reach a boarder gaming audience.

"For VR we want to be building a platform with a billion users or 10, 15, or 50 million, and that's where we feel for content for games [Facebook] is going to have a lot more success shipping their content into a gaming ecosystem platform that has a billion users."