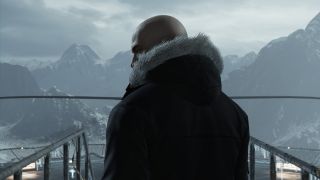 Eventually, I start feeling sorry for Viktor Novikov. I think it was after the time I drowned him in the toilet and before the time I dropped a chandelier on him. This is his big day, after all. Not only is his chateau hosting the biggest fashion show Paris has ever seen, with the most 'in' designer and models, but his secret spy organisation has just completed a five year operation to gather a complete NOC list.

As I stab him with a hidden screwdriver for the umpteenth time, dump his body in a convenient chest freezer, and saunter away dressed as a makeup artist, I absentmindedly think that perhaps he would have appreciated this - to go out on a high, his career at a peak in both professions. To die at the right time is a blessing, surely? I set the fireworks show off early, in his honour.

I'm playing the new episodic Hitman, the first episode of the reboot, set around a packed French palais. After the poor reception of the recent Hitman games and the amazingly-terrible movie, we've all been approaching this semi-reboot cautiously. On the showing of this smart set-piece and the huge array of ways to approach it, we can afford to be more optimistic.

On another run, while I'm dragging a naked, limp corpse around the elegant gardens of the Paris chateau, dodging guards like a bad farce, I wonder if Novikov's partner Dahlia Margolis would feel the same way, about death at the right time. She doesn't strike me as such a romantic. I'm currently dressed as one of her friends, the superstar model Helmut Kruger, complete with a Bowie-esque spray-painted face. (Kruger himself got dropped, comatose, over a wall into the Seine, a moment ago.)

Margolis herself is a former supermodel, but also the brains behind IAGO, the information broker that Novikov ostensibly runs. Whilst Novikov runs the show, Margolis is auctioning off top secret data on the building's top floor.

My task here is simply to kill them both, to prevent what that they're selling from going any further. The crowds of people and the complex layout would normally make that routine - but they're both closely guarded by heavily-armed men. Novikov is the easier of the two to access - he's getting hands-on organising the show, starting by announcing it from the central staircase.

You could plug him then and there - and I've tried - but with so many guards around, you're not going to get very far. It's easier to wait for an opportunity - or rather an Opportunity. These plot-driven assassinations are easier ways of completing your mission and require you to follow a breadcrumb trail throughout the level. Novikov, for example, enjoys a particularly ridiculously cocktail. If you can find some poison in the building (for example on Margolis' desk), you can give that drink an extra 'kick'.

Attempting to ice Novikov on the spot also won't help you achieve any of the challenges that this new Hitman throws up. This level, for example, has more than thirty, which reward you for killing the two leads in varied ways. And the level itself is huge - bigger than any previous hitman level - over four levels, filled with brow-scratching interactions that you just know could be cobbled together into a plan.

A good plan might just get you that coveted Silent Assassin rating, where you go through a mission never being noticed at all, nor recorded on security footage, nor leaving any evidence behind.

Getting to Margolis, up in her office at the top of the building, is much harder. She doesn't move unless she's evacuated by her guards, and that only happens when the alarm is triggered. However, there's an Opportunity here too. If you wait for Kruger (to whom 47 bears an uncanny resemblance) to finish his fashion shoot and nobble him, you can doll yourself up as him, get a cringing make-up artist to apply his unique look, do a turn on the catwalk, and then wander the building with impunity - right up to Margolis herself, who wants Kruger to seduce some official's daughter… sadly, you can't choose to do that, but you can garotte her and throw her out of the window onto the model-littered catwalk below.

What Margolis is collecting and IAGO is selling is key to this sort-of-rebooted Agent 47. It's a NOC list, familiar to fans of spy thrillers, containing the names of all the unofficial undercover agents worldwide - which of course, is of huge value to every government in the world.

'Essentially, this is Bond the hitman'

That reflects 47's new storyline - all the old storyline is gone, burned to the ground. Even 47's appearance and accent appear to have changed, to something more British and classically action spy-oriented, away from the flat-footed of the earliest games. Essentially, this is Bond the hitman.

This new storyline, free of the earlier games' narrative shackles, allows developer IO Interactive to use their imagination again, the way they did in the classic Hitman: Blood Money. With 47 applying to a new assassination agency, he gets a new handler, a new unfriendly boss, and a whole new series of exotic targets for all sorts of different agencies and companies.

So before you head off to Paris, you have to complete a tutorial section (replicating the assassination of a jewel thief on his yacht), before moving onto a 'final exam', which replicates the murder of a turncoat chess grandmaster on a military airbase.

As I mentioned earlier, the new Hitman is episodic - a creative decision that has divided opinion. The episodic approach makes Hitman feel like a TV box set, where you can rinse the earlier episodes until you feel you have to move on. Buying the whole thing ahead costs a normal AAA game price - $60 - but you can buy it piecemeal instead, for slightly more. As it is, the starting $15 pack consists of the areas we played - the prologue area and the giant Paris level.

'The evidence suggests Hitman has fixed the problems of Absolution'

That might not seem like much, but there are extra modes beyond just the storyline levels and their associated challenges. The Escalation mode adds more variety to the world. Essentially, this allows players to approach each level several times, with the difficulty ramping up on each success. So after I'd successfully nobbled one lone, random barman on the Paris level, my next task was to start again, and kill someone else in the level - but dressed as a makeup artist, using a ceremonial sabre. It's not the easiest weapon to conceal. As the levels go up, the targets get harder, the methods get more difficult and the location fills with more guards.

Similarly, the Contracts mode (improved from Absolution) allows you to create your own hits and share them. Choose a hard target and kill them in a unique way, then force your friends to do the same.

And finally, there are special Elusive targets, who appear once in your game, for short time windows. Each of these has his or her own backstory, which you can discover through overhearing conversations between NPCs and hunting out clues. If you fail to kill them, they get away, and that's it. It's sort of a one-off iron-man or roguelike hit, like Spelunky's daily challenge.

Is that enough content for this episodic model to work? The flat fee is no different from a normal AAA price, so if the game contains the same amount of content that should be uncontroversial. For the separate episodic purchase model, the jury is still out. $15 for the the base game and one level, even with all that mechanical variety, is probably a bit steep - but it at least allows embittered series fans to try before they wholeheartedly commit - and will definitely push it to the top of the charts on release.

On the evidence of this hands-on, IO has fixed the problems of Absolution. Playing the same level over and over didn't try my patience as I thought it would, because of the huge variety of paths and challenges - watching the other journalists in the room play, I could see that they were all taking different routes through the level. This, then, is thematically much stronger, with a bigger, better puzzle-sandbox feel, tougher combat to eliminate the temptation to run and gun, and it looks pretty astounding too.

IO should finally have another hit on their hands - if that episodic model works.