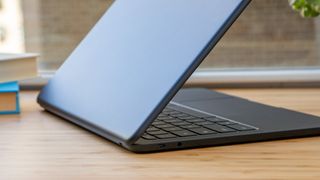 The best Chromebooks tend to be low-cost machines that can handle simple computing tasks, although there are some premium machines. One thing they all have in common is basic, integrated graphics, but that might change with the arrival of a gaming Chromebook with dedicated graphics, according to a new leak.

A Chromebook spotted by Chrome Unboxed, which is codenamed 'Mushu' and which may be part of Intel's Project Athena program that aims to shape the next generation of thin, light and powerful laptops, appears to include a dedicated graphics processor. It's not clear which chipmaker is behind the GPU, but AMD and Nvidia are likely candidates.

This would be a first for Chromebooks, and would enable such machines to deliver new levels of performance in some applications, one of which would be gaming.

The idea of a Chromebook getting a discrete graphics processor may seem a bit out there – or at least it would have seemed that way a year ago.

Editing spreadsheets, streaming Netflix, writing up documents, and browsing the web are typical tasks for a Chromebook. What they all have in common is a lack of any need for a powerful, dedicated graphics processor; they don't even need a very beefy CPU.

There's still a market for powerful Chromebooks such as the original Pixelbook and the Samsung Galaxy Chromebook, though. And that's the side of the market where we could see a dedicated graphics processor show up.

Photo and video editing could benefit from an upgrade over integrated graphics, as could gaming. Considering that Valve and Google are working to bring Steam to Chromebooks, a dedicated graphics processor starts to make a lot more sense.

Existing Chromebooks, even on the premium end of the spectrum, will only be able to run a small number of games from the already reduced library of Steam games readily supported on Linux, and that would change with the arrival of a dedicated graphics processor.

And, depending on how well Valve and Google get Steam and its library working on ChromeOS, we could be looking at our first gaming Chromebook this year – we don't expect it will be anything close to the best gaming laptops, though.