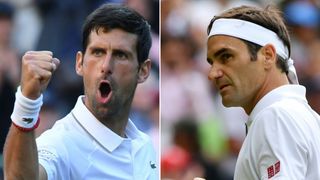 It's a beautifully poised Wimbledon 2019 men's singles final. After serving up two weeks of scintillating tennis and copious amounts of strawberries and cream, the All England Club today plays host to the showpiece finale - Novak Djokovic vs Roger Federer.You can watch all the action from SW19 no matter where you are in the world with our Wimbledon final Djokovic vs Federer live stream guide below.

Roger Federer and Novak Djokovic will face off in the final with the veteran Swiss star out to extend his record of Wimbledon title wins to eight and add to his 20 Grand Slam singles title victories. For Djokovic, the showdown provides the Serbian star the opportunity to win his fifth Wimbledon and 16th Slam crown.

Novak Djokovic vs Roger Federer - where and when

Today's match will need to go some way to match the drama of Federer's gripping semi-final clash with Rafa Nadal. While it perhaps didn't quite match the heights of their legendary 2008 final clash, the four-set match was a gripping, full-bloodied affair between two old rivals, leaving you wondering if Federer will have enough remaining in the tank for today's final.

Djokovic was also made to work during his semi-final clash against Roberto Bautista Agut, which saw him drop a set for only the second time during this year's tournament. Djokovic has come came out on top on the last two times the pair have met in Wimbledon finals and the Serbian is placed as favourite to win today by Betfair.

Nevertheless, Federer appears to have magically turned back the clock during the past two weeks at SW19, playing the sort of tennis we would have expected from him a decade ago. With his serving game back to its lethal best and today's match being played on his favourite grass surface, the 37-year-old may just edge this one.

It's all set to be an intriguing and unmissable battle on Centre Court, and one you'll be able to watch using the guide below - read on to find out how to get a Djokovic vs Federer live stream no matter where you are in the world.

The final is being broadcast all over the world - we'll tell you some of the UK, US Australian, Canada and New Zealand broadcasters below.

But if you're abroad today and still want to watch your familiar old coverage, you'll need to download and install a VPN to get around the geo-restrictions that will block you.

It's really easy to live stream Wimbledon with a VPN, especially as we've done the hard work for you by reviewing over 100 of the best (and worst) providers to see which one is best. Honestly, it was quite an easy choice to pick out ExpressVPN, thanks to its water-tight security, rapid connection speeds and super easy-to-use interface.

We really like that you can use it on such a vast number of devices, too, with apps on Android, iPhone, iPad, Amazon Fire TV, Apple TV, Roku, PS4, Xbox and more all available. As we say, an easy choice for #1 in our best VPN chart.

Sign up for ExpressVPN and save 49% on the best all-round VPN for streaming. It comes with 30-day money back guarantee, so you can give it a try without spending a thing. And if you sign up for a whole year, Express will give you three months absolutely FREE!

And don't forget that getting a VPN isn't just a great idea for watching tennis. Your day-to-day online life (think banking and shopping) is made safer with a Virtual Private Network thanks to the anonymous, encrypted tunnels they use. They're great for accessing blocked websites and loads of people use them to access foreign Netflix catalogues, too.

The BBC has got comprehensive coverage of this match and all of Wimbledon (as always!). There are HD and 4K UHD possibilities and you can also watch via laptop, mobile and tablet on the iPlayer app, completely free.

Today's match will be broadcast live on BBC One, with coverage starting at 12.45pm

Out of the UK today? You'll soon find that the iPlayer coverage is geo-blocked. Annoying, but as we explain above, getting a VPN to virtually relocate to the UK. Once you've installed one and connected to a UK-based server, head over to TVPlayer.com where you'll find all of the UK's Freeview channels in one, robust place.

How to watch the Djokovic vs Federer final in the US

US tennis fans have a couple of different options for catching today's final on TV. You can either tune into the Tennis Channel or ESPN. It's worth knowing that both of these are cable-based services so in order to watch you'll need to have a subscription.

Unless you're a cable cutter, in which case you can also access the ESPN Wimbledon live stream by grabbing a subscription (or free trial) to any of the following TV streaming services:

Logging in to the broadcast from overseas is also a great option using a US VPN and following the instructions above.

Good news Down Under - free-to-air Channel Seven is showing Wimbledon 2019 coverage. That means you can enjoy today's final directly through your TV or you can stream it via 7live.com.au on your favourite gadget be it a phone, tablet or computer.

Live coverage will also be on offer from Fox if you're a cable subscriber Down Under. And then there's the new face in sports streaming, Kayo (early rounds live, quarter finals onwards on demand). A Kayo Sports Basic Package costs $25 per month and allows users to stream across two devices simultaneously. Alternatively, the service also offers a Kayo Sports Premium Package, which provides three concurrent streams for $35 per month.

If you try to watch any of that Wimbledon coverage online outside Australia, you'll need to use a VPN.

How to live stream Djokovic vs Federer in Canada

Like in the US, Canada has cable-only viewing of Wimbledon 2019 - this time on TSN. It's a subscription service, we're afraid, so you'll have to pay some dollars if you want to watch this year's tennis action.

Stream Djokovic vs Federer live in New Zealand for free

Free-to-air TVNZ is showing all the action from today's Wimbledon men's final  for FREE in New Zealand. That includes today's match which will be broadcast on the Duke channel.

Additionally, Spark Sport will also be showing matches. It offers a free seven-day trial to get a taste of the new service, and is $19.99 thereafter.

And don't forget that using a VPN will allow you to watch those options even when you're away from New Zealand.