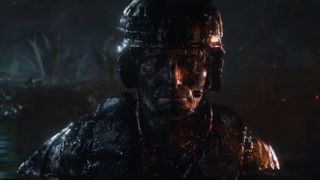 Death Stranding’s release date is fast approaching and Hideo Kojima has dropped a brand new trailer which gives us another glimpse into its mysterious world.

The latest trailer, first shown during San Diego Comic-Con, is taking a somewhat different approach than previous ones by focusing on just one character: Heartman. Played by Danish filmmaker Nicolas Winding Refn, Heartman is a Bridges member who is “committed to researching the truth of the Death Stranding”. Aren’t we all at this stage?

As explained by the trailer, and by Kojima himself on Twitter, Heartman is a character whose heart stops every 21 minutes. Each time his heart stops he dies for around 3 minutes and enters the world of the dead before being revived by a defibrillator strapped to his chest and returned to the land of the living.

HEARTMAN cutscene that I introduced at SDCC is out now. HEARTMAN is a member of BRIDGES. His heart stops every 21 mins,spends his time in the world of the dead for 3 mins and comes back by AED. 60 times/day. Thanks to my best friend & filmmaker Nicolas W Refn for his appearance! https://t.co/pcjg8dE4cI27 July 2019

As a result, Heartman lives his life in 21 minute chunks and seems to be making the most of it. “Most of life’s basic functions fit rather easily into a 21 minute time slot” he explains to lead character Sam. We’ll take his word for it—he clearly hasn't opened Netflix without a game plan.

It won’t surprise anyone at this point that this latest trailer still leaves us with questions about Death Stranding but, with these two and three minute glimpses which are increasing in frequency, a bigger picture of what we can expect from the game is starting to build. Hey, maybe Heartman is more relatable than we first thought.

Death Stranding will release on PS4 on November 8 2019.