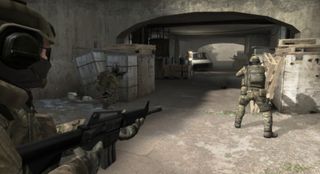 The latest from the PC gaming grapevine is that Counter-strike: Global Offensive is getting a ‘Battle Royale’ mode in the style of massively popular hundred-player-shootout PlayerUnknown’s Battlegrounds (PUBG).

Before we go any further, we should clarify this is firmly in rumor mill territory, with the speculation springing from a video courtesy of Valve News Network (VNN) which does some digging into CS:GO’s code.

VNN combed back over 10 patches for the last year and a half, finding references to compound bows, unarmed combat, parachutes, supply crates, breach charges, beacons, and loads of stuff in a similar vein, and many mentions of ‘survival’ spawn points, phases and the like.

There’s also a reference to a still unreleased ‘island’ map which is another potential clue.

All of which, when put together, possibly point to the foundations of a PUBG mode in CS:GO – but then again, these files could mean nothing, or could be related to something else. Or it could be an idea Valve had at one time, and has now abandoned.

At any rate, you can check out the full gamut of VNN’s detective work in the video below.

As VG24/7, which highlighted the clip, suggests, there’s even a remote possibility that Valve could have inserted these references just to troll folks and have a little fun at everyone’s expense (and get a bit of PR exposure for its game, naturally).

Who knows, ultimately, but the whole Battle Royale concept has got so popular these days, you could hardly rule out the idea of Valve jumping in on the act to inject fresh life into the veteran game.

Although we’re sure a lot of players would prefer something truly fresh as opposed to a spot of bandwagon-jumping.

Given PUBG’s massive success on Steam, where it has even managed to tilt the gaming platform’s statistics monitoring operating system usage (apparently due to the influx of Chinese users playing the game), it’s hardly surprising to see a lot of development along these lines. Even GTA Online introduced its own spin on PUBG back in the summer.