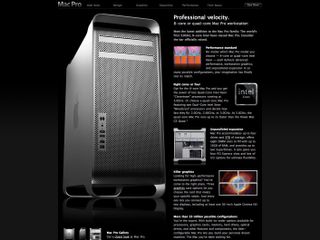 The eight-core MacPros appeared on Apple's US website today

The powerful Intel chips were previously codenamed Clovertown. Each of the four cores on both chips is clocked at 3.0GHz.

The new machines have not yet appeared on the Apple UK website, but in the US there's a premium of $1,498 for the two quad-core chips over the pair of dual-core chips that previously populated the top-notch Mac Pros.

If you don't want to go the extra mile, the pair of dual-core "Woodcrest" processors remains available from $2,499 with all cores clocked at 2.0GHz, 2.66GHz, or 3.0GHz. Apple says the eight-core Macs are 1.3 times faster than the quad core configuration.

Other than the new silicon, the specs remain unchanged - you can still specify up to 16GB of RAM and 3TB of hard disk space. The graphics are the most surprising unchanged specification, but AMD/ATI is yet to announce its new R600 generation of graphics chips - previously rumoured to feature in the Mac Pro line.

The launch of the new Mac Pros isn't unexpected given the recent launch of Adobe's Creative Suite 3 and with next week's National Association of Broadcasters (NAB) show due to take place next week. Expect them to appear on the UK Apple Store soon...

We previously reported on a glitch in the Apple UK website which suggested eight-core Mac Pros were imminent.