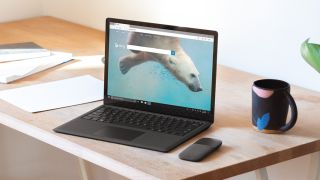 Chromium-based Edge has received some further useful additions, including the introduction of dark mode for users on Windows 7 and 8.1.

As you may recall, back in June when the revamped Edge was first launched for Windows 7 and 8.1 users, it didn’t have a dark mode, but Microsoft promised that the feature was coming soon.

And dark mode has now arrived in the Dev channel (build 77.0.218.4), along with a considerable amount of bug squashing which includes fixes for crashing when opening PDF files, and crashing on the Extensions page. An issue where Edge stopped the Windows shutdown process has also been cured.

As ever when testing preview versions of software, plenty of bugs are to be expected.

Mac users also got a little fix in this build, so the copy and paste keyboard shortcuts should now work correctly for those using macOS. These developments were spotted by Windows Central.

As we’ve seen recently, the work Google is doing on Chromium also benefits Microsoft’s new Edge (because it has switched to the Chromium engine), and a fresh benefit is arriving in this vein.

This is Global Media Control for Chrome, which is now in the Canary (early testing) version of Google’s browser – but can also be enabled in Microsoft Edge Canary and Dev preview builds.

This gives you a toolbar button to access a fly-out panel that lets you adjust the controls for videos – YouTube content, for example – without having to go to the tab where the media is actually playing. It’s a convenient extra touch featuring controls to let you pause, play or skip a track without actually having to leave the tab you’re currently working in, plus you get a thumbnail of the video in the overlay panel, too.

To enable this feature in the Edge preview, however, you’ll need to do a little tweaking. As Windows Latest explains, you’ll first need to create an Edge shortcut on your Windows desktop. Then edit this shortcut by right clicking it, and selecting Properties.

Go to the Shortcut tab, and in the window labelled 'Target', add the following command on the end of the EXE (remembering to leave a space between the EXE and the below text):

Click 'OK' to apply the change. Start Edge again using this shortcut, and you should see the Global Media Control icon in the browser’s toolbar.

Remember that this is still a feature in testing, and as such may be a bit wobbly. Also, there’s no guarantee it will make the cut for Edge (or indeed Chrome), although the aforementioned dark mode most certainly will (as Microsoft previously promised this was definitely coming for Windows 7/8.1 Edge users).