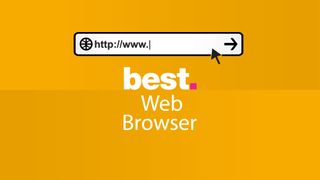 The right browser can make a massive difference to the way your internet works. It can protect you from advertisers’ tracking and from online irritations. It can sync all your stuff with your phone and/or tablet. It can bring you the content you need and filter out the stuff that you don’t.

Big news isn’t that common in the world of web browsers, but in late 2019 there was a bit of an earthquake: Microsoft’s Edge embraced Chromium, the same software that powers Google Chrome. That means four of the five top browsers are Chromium-powered.

The main holdouts are Apple's Safari (not included here) which uses WebKit, and Firefox, which uses Gecko. That’s had an interesting effect on our top five, and demonstrates that browser tech can still surprise us.

No matter what kind of internet user you are, there’s a browser out there that’s perfect for you – and chances are it’s one of these top five.

The best browsers at a glance

The best browser for power users and privacy protection

Firefox has long been the Swiss Army Knife of the internet and our favourite browser. Version 72 is particularly good: it can alert you if your email address is included in a known data breach, it blocks those annoying allow-notifications popups, it blocks “fingerprinting” browser tracking and it brings its picture in picture video mode to the Mac version. As before it’s endlessly customisable both in terms of its appearance and in the range of extensions and plugins you can use. Last year’s overhaul dramatically improved its performance, which was starting to lag behind the likes of Chrome, and it’s smooth and solid even on fairly modest hardware.

As much as we love Firefox – right now it’s still our favourite browser – we’re worried about its future. 2019 wasn’t a great year for Mozilla, with a major add-on crisis in May that Peter Saint-Andre and Matthew Miller claimed “was the result of having an interlocking set of complex systems that were not well understood across the relevant teams”. The lack of in-house quality assurance teams was also highlighted – much of Mozilla’s QA is outsourced – and in early 2020 the QA leads were reportedly let go in a round of layoffs. Mozilla’s struggling for income, so if you value Firefox you might want to visit donate.mozilla.org to help secure its future.

A genuinely great browser from the former browser bad guys

Visit site
Very, very fast
Crystal clear privacy tools
Can save sites as apps
Windows really wants it to be the default

Older readers will remember Microsoft as the villains of the Browser Wars that ultimately led to the rise of Firefox and Chrome. But Microsoft is on the side of the angels now and its Edge browser has been rebuilt with Chromium at its heart. It’s Windows’ default browser and there are also versions for iOS, Android and Mac.

The new Chromium-powered version is considerably faster than its predecessor and includes some useful features including Read Aloud, the ability to cast media such as inline videos to Chromecast devices, an Opera-style start page and a good selection of add-ons such as password managers, ad-blockers and so on. You can also download web pages as apps which then run as stand-alone applications without having to launch the whole browser. That’s useful for the likes of Google Docs or Twitter.

There are lots of customisation options and we particularly liked the Privacy and Services page, which makes potentially confusing settings crystal clear, and the Site Permissions page. That gives you fine-grained control over what specific sites can do, including everything from pop-ups and ad blocking to MIDI device access and media autoplay.

Edge looks like Chrome and works like Chrome, but we like it more than Chrome: it’s noticeably faster on our Mac and the customization options are superb.

It’s the world’s favourite browser, but it can be a memory-muncher

If imitation is the most sincere form of flattery then Microsoft’s adoption of the Chromium engine for its own Edge browser must be making Google feel pretty good about themselves.

But there are some areas in which Microsoft’s contender actually beats the big G, most noticeably in resource usage: Chrome is infamous for its hefty resource demands and it can fairly chug along on low-powered hardware with limited RAM.

The new Tab Freezing feature is designed to address that by automatically 'freezing' background tabs so they’re not using resources unnecessarily, but Chrome remains pretty hardware-hungry.

Chrome 79 is by no means a bad browser. Quite the contrary: it’s a brilliant browser with a superb library of add-ons, cross-platform support and sync, excellent autofill features and some great tools for web developers. It can warn you if your email’s been compromised, it has secure DNS lookup for compatible providers (Google’s own Public DNS is one of them) and it blocks lots of dangerous mixed content such as scripts and images on otherwise secure connections. It also enables the WebXR API for AR and VR. And don't forget about Chrome dark mode, which makes browsing easier on the eyes at night.

These are all good, but we think Firefox beats it on privacy protection, Edge is nicer to spend time in and other, niche browsers don’t come with the lingering fear that Google’s just a little bit too involved in all of our lives.

Opera sets out its stall the moment you first run it: its splash screen enables you to turn on its built-in ad blocker, use its built-in VPN, turn on its Crypto Wallet for cryptocurrency, enable in-browser messaging from the sidebar and move between light or dark modes.

It’s a great introduction to a really good browser, although if you’re a gamer you should check out Opera GX instead: that’s designed specifically for gamers and features Twitch integration and Razer Chroma support.

Opera is yet another Chromium-based browser, so performance is speedy and you can use add-ons from the Chrome library. It also has some interesting ideas of its own such as Flow, which is designed for people who often spot things they want to come back to later: if you’re constantly emailing or messaging interesting links to yourself, Flow enables you to do that more elegantly by making it easy to share content from Opera on your phone to Opera on your computer.

There’s also Personal News, which is reminiscent of the Feedly RSS reader, Apple News or the Flipboard tablet app: it enables you to add your preferred news sources to create a personalised online newspapers.

Opera is packed with useful features, but one of our favourite ones is no longer in the desktop browser: Opera Turbo, which compresses internet data such as images so things load faster on crap connections, is now only available for mobile browsers. You do get a handy battery saving mode, however, so when your downloads are slow at least you don’t need to worry about your laptop battery dying.

Build your own browser with unique docking and tab-stacking

Vivaldi is the brainchild of former Opera developers, and like Opera it does things differently from the big-name browsers. In this case, very differently. Vivaldi is all about customization, and you can tweak pretty much everything from the way navigation works to how the user interface looks.

Chromium is once again under the surface here (which means you can use most Chrome add-ons), but what’s on top is very different from other Chromium-based browsers. You can pin sites to the sidebar, stick toolbars wherever suits and adjust pages’ fonts and color schemes; have a notes panel as well as the usual history and bookmarks bits; customize the way search works and give search engines nicknames; change how tabs work and get grouped and much, much more.

You can even view your history in graph form to see just how much of your time you’ve been spending on particular sites. We particularly like the tab stacks, which are a boon for anyone who tends to end up trying to keep track of dozens of open tabs.

If you’re the kind of person who likes to fiddle with interfaces instead of getting on with stuff, it’s a potential productivity nightmare – but it’s fantastic for power users who know exactly what they want and how they want it to work.