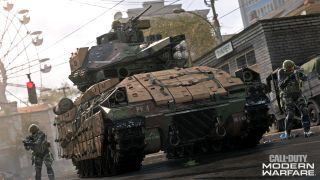 Call of Duty: Modern Warfare will be ‘fully optimized’ for the PC, meaning this won’t be some kind of deprioritized port of the game (as you would hope), and it will be delivered with a raft of PC-specific features and cross-play with consoles.

According to a report on DualShockers, the PC version will have an uncapped frame-rate and a FOV slider (Field of View, so you can make that wider, meaning you can see more of the battlefield in your peripheral vision).

Modern Warfare will also support ultra-wide monitors, and indeed multiple monitor configurations, along with HDR. Fully customizable controls will be present, and that includes ‘advanced’ options for your bristling-with-buttons gaming mouse.

And of course we already know that Modern Warfare will support ray tracing with Nvidia’s GeForce RTX graphics cards.

This is obviously great news for PC gamers looking forward to Infinity Ward’s shooter, the PC port of which is being developed in conjunction with Beenox (who worked on previous Call of Duty ports including Black Ops 4).

And those PC gamers will further benefit from full cross-play with PS4 and Xbox One players, and before console folks start to wave pitchforks about mousing advantages (i.e. flick turns and superfast snap movements), the matchmaking system will take your peripheral(s) of choice into account.

Joe Cecot, who is co-design director of multiplayer at Infinity Ward, told DualShockers: “We’re going to be matchmaking by peripheral, so if you’re a [mouse and] keyboard player you’re going to play with other keyboard players. But, if you’re a console player and you’re playing on a gamepad you can actually opt in … We also don’t let you change your controller or peripheral mid-match, so once you’ve chosen it, it’s locked in.”

Call of Duty: Modern Warfare will be out on Battle.net for the PC at the same time as the console versions, namely October 25, with the open beta (featuring cross-play) coming to all platforms on September 21.