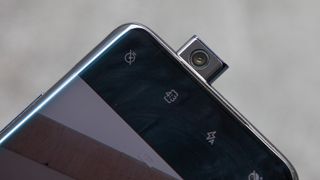 Smartphone manufacturers have a problem, and that problem is us – the smartphone consumer.

When they ask us what we want, we say: everything! We want our screens to be bigger but the bezels to be smaller, our batteries to last longer but our phones to be slimmer.

And most of all, we want to take selfies in such high resolution that you can see the individual atoms that make up our face.

Juggling all these different requirements is hard enough for any hardware, but when you’re dealing with the constraints of mobile phones it’s harder still.

And that’s why smartphones are getting weird.

All about that space

Smartphones are all about cramming a lot of tech into a relatively small space. Once you’ve got the battery in there, there isn’t room for much else – but modern multi-lens, integrated flash camera assemblies need a lot of room, and cameras are very high on buyers’ list of priorities.

How do you square that circle? You could do what Apple does and stick a lumpy bit on the back and a notch on the front. Or you can think outside the box, literally. Why have a built-in camera when you can have one that pops up instead?

Pop-up elements are hardly a new idea in camera design: compact cameras have had pop-up flash units for many years. But actual pop-up cameras in smartphones are a relatively new invention, and they’re a hot trend in smartphone design.

So where did they come from, and are they going to hang around?

Making room for all the bits that manufacturers want to get into a phone is a problem that goes back long before the original iPhone, and it resulted in some iconic designs such as the folding Motorola Razr V3 of 2004 and the folding and sliding phones of the pre-iPhone era such as the Windows Mobile-powered O2 XDA II.

In those days the problem wasn’t the camera – it was the keyboard. Whether they folded up or slid away, the keyboard mechanisms were hidden from sight until they were needed in order to make the devices look as small as possible.

Then the iPhone came along and got rid of the keyboard altogether, and everything was brilliant...until it wasn’t.

The problem of keyboards may have gone away, but after a few years the smartphone designers faced a new kind of space invader: the camera.

As fashion demanded ever-thinner bezels and edge-to-edge screens with ever-bigger batteries to power everything, the room for camera hardware became increasingly squeezed – but at the same time, the number of cameras and sensors in a typical device was increasing.

Take the iPhone X, which Apple released in 2017. On the back there’s not one but two lenses, and a flash; on the front, the camera array has sensors plus an infrared camera, a front illuminator, a dot projector for Face ID and the actual camera itself.

Unless you want to go back to having big bezels there are two ways to accommodate all this. You can build the camera elements into the phone, either by having a 'notch' taking a chunk out of the screen – the approach taken by Apple and others – or by putting a 'punch-hole' cutout in the screen, a solution implemented on devices such as the Samsung Galaxy S10.

Or you can build out, which is what Huawei did in 2015 and many more firms are doing today.

Are you in or out?

Huawei’s Shot X took a sensible approach to the issue of fitting camera hardware into a sleek design: if it isn’t going to be used all the time, Huawei thought, there’s no need to see it all the time.

So Huawei stuck the camera in a pop-up tab that not only popped up, but did so in such a way that you could use the main camera to shoot selfies. The phone wasn’t a huge success, however, so the idea wasn’t widely copied.

The first of the current crop of pop-up camera phones was the 2018 Vivo Nex, whose 8-megapixel camera pops up when the camera app is activated – although while it’s there for selfies it doesn't do face unlock – for that you’ll need a device such as the Vivo V15 Pro, whose pop-up camera also does fast Face Unlock.

OnePlus has taken the pop-up approach with its OnePlus 7 Pro, as has Realme with the spring-loaded Sony selfie shooter in the Realme X.

Meanwhile Xiaomi has gone back to the Matrix-style phones of the mid-1990s for its Mi Mix 3, which has both its front and rear cameras in a sliding rear section, and Lenovo’s Z5 Pro and the Oppo Find X take the slider approach too.

Samsung takes a slightly different tack. The camera on the Samsung Galaxy A80 doesn’t just pop up – its camera assembly rotates, enabling you to point its three lenses and 48 megapixels wherever you fancy, and this rotating section also includes the depth camera for portrait effects.

Asus has a similar system in its ZenFone 6, once again offering 48 megapixels in its motorized housing. It was actually first debuted in the Oppo N3, a phone randomly sent to TechRadar and sat proudly in our hall of curios... until the tech suddenly became popular again.

Which is better: pop-up, punch-hole or notch?

No matter what technology you use, cameras all have the same basic requirement: they need a lens to let in light and to see what you’re snapping, and bigger is often better here.

Let’s look at a notch-design camera first, where space is very limited. The front-facing camera in the iPhone XS Max's notch is a fixed-focus lens with a 32mm equivalent focal length and an aperture of f/2.2.

Aperture tells you how much light gets in; the lower the number, the better. Focal length tells you how zoomed-in the image will be, so how big or small subjects will appear in the frame, and lower numbers are better for getting more into the frame.

Let’s compare the iPhone’s notch camera with the one in Samsung’s S10 Plus, which has a larger space thanks to its punch-hole design (and two cameras instead of one).

The primary front camera has an f/1.9 aperture to Apple’s f/2.2 and a shorter focal length, equivalent to 25mm. That’s comparable to the iPhone’s main camera, which is f/1.8 and 26mm.

What about the pop-ups? The OnePlus 7 Pro’s front camera has a 25mm equivalent focal length and an f/2.0 aperture. Again, that’s comparable to the main rear camera on many phones.

Why is this important? Well, in a bid to bring the very best technology to smartphones (and allowing brands to charge just that little bit more for the privilege) these front-facing cameras need to start rivalling the technology of the rear - and physics kind of gets in the way of shrinking them.

Will the pop-up bubble pop?

Are pop-ups the future? We suspect not. That’s because mechanically moving parts get stressed: they wear, and they break, and stuff gets into them. That’s particularly true when they’re in a device that spends so much of its time in pockets and bags, where fluff and various debris can be found.

If your moving parts are motorized the motor is another potential point of failure, and it’s a power drain too – each individual pop-up might not take a lot of energy, but if you use the camera multiple times over the course of a day they'll mount up.

One solution might be to look back at the other way of hiding hardware as demonstrated by the iconic Motorola Razr: instead of sliding the camera out of sight, fold it.

We can’t help thinking that a lot of the problem is that manufacturers are currently prioritizing form over function – after all, we already have a solution to the selfie problem that doesn’t require spring-loading, motors or cutting bits out of the screen.

It’s called a bezel, and it's a perfectly good place to stick a camera - if they can be miniaturized to fit into the sliver of space around the edge of the phone.

If that doesn't work, then it's about going invisible: Samsung has already confirmed that it's working on a sensor that's impossible to see (and the camera quality isn't, apparently, affected) and Oppo has gone one step further by actually showing off a prototype of such technology.

According to the Verge, Oppo admits that this will have a slight impact on the camera quality, but it's worked out ways to optimize the hardware to make the quality comparable.

Invisible cameras feel like the obvious next step from the pop-up - one that doesn't pop up at all. It merely turns on when needed and creates and unbroken display, one free of mechanical misadventures - now we just need to wait to see when (or if) the technology becomes mainstream.