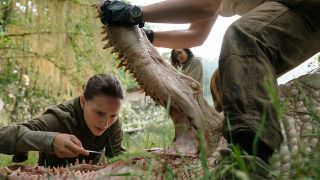 Alex Garland’s latest movie Annihilation is now available to watch on Netflix. It’s a female-lead film full of smart sci-fi and one that should have people talking for years to come.

Unfortunately, the only thing people do seem to be talking about is the fact the movie was not given a cinematic release outside the US. Instead, it’s gone ‘straight to Netflix’.

This shouldn’t be seen as a bad thing but it feels like the phrase has been tarred with the dreaded ‘straight to video’ brush which, quite rightly, has been used for years as a metric of ‘meh’.

Straight to Netflix is a concept that will change - there are plenty of these films in our best movies on Netflix list - but for now it’s just confusing people. You have some who see a Netflix-only movie as something that utilises as a brave new distribution model that bypasses the entrenched, archaic release schedule that cinemas adhere to. For others it’s just a place where movies that are certain for a critical bashing will be seen no matter what.

Netflix shouldn’t be seen as a dumping ground for movies that studios don’t know what to do with. Unfortunately, that is just what it is being treated like at the moment.

But one person’s rubbish is another person’s treasure and Netflix need to capitalise on this and quick. It tried to do something with The Cloverfield Paradox. Okay, we'll admit that this was a movie that got a critical bashing but it also garnered a huge amount of hype as the first time people saw anything about the movie it was on a trailer at the Super Bowl - it was then released on the service that night.

I wrote about how this was one of the biggest changes to happen to movie distribution in a long time. Yes, the movie was being seen as a dud but Netflix managed to ramp the excitement up - it became a Twitter trend that closely crept up alongside the Super Bowl’s social chatter.

And now Annihilation is on Netflix – not that you would know. At the time of writing, the UK Netflix Twitter feed has nothing on it, it’s nowhere to be seen on Netflix’s homepage.

It’s there in the search box so you are all good if you know what you are looking for and if you can actually spell Annihilation. Some 'New Arrival On Netflix' phone notifications are trickling through but it’s all a bit underwhelming. It shouldn’t be like this.

Annihilation may not be seen as mainstream enough for Netflix to promote wholeheartedly. Fine, if that’s the thinking, but it’s precisely these sorts of movies that make Netflix such a powerful platform. Currently Annihilation’s success is relying on word of mouth, much like many Netflix movies currently on its service.

But there is hope. Annihilation will be around on the service a lot longer than it would be in the cinema release schedule.

This could mean that despite a lack of celebration it’s had arriving on Netflix, the site could still build a campaign around it. It could use its no-doubt real-time analytics and begin to push the movie more if it sees popularity forming thanks to word of mouth.

This is a luxury that cinemas just don’t have - they have to capture lightning in a bottle within a tight schedule, something that unfortunately didn't happen with Annihilation's US cinema run. Netflix has time to build something but that shouldn't stop it from doing something interesting and exciting on day one.

Through its millions of subscribers there is no doubt an audience for this movie, more so that it will get on its limited US cinema run. Netflix needs to unite them and get them excited about the film, not just rely on its algorithm to serve the movie up to the relevant user.

Netflix has a very fixable problem. It’s got the content - you just have to look at Okja, the two Creep movies and Gerald’s Game - but it still doesn’t quite understand how to shout about it. It needs to do this, though, if it really wants to be the future of how we watch movies.

If you are going to take the cinema out of the equation then you need to replace it with the feeling that movie is still an ‘event’.

Just because the screen it is being shown on is small, it doesn’t mean that the thinking about how to promote the movie has to be.