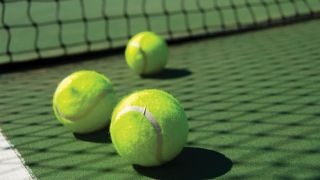 Strawberries and cream, white uniforms and a lot of grunting - there are few events so ingrained in the psyche as Wimbledon.

Not all are lucky enough to be able to attend the event in person however, most will be stuck at home finding a Wimbledon live stream to get their fix - and perhaps with little to do in-between matches.

What better way to psych yourself up for the next round of matches, than to indulge in a few of the finest tennis games available on mobile - be they on Android or iOS.

From straight simulations, to arcade score attacks, clash of clans-style touch farming to statistic based simulators, there is something for everyone.

Read on for ten of our top tennis games available on Android and iOS.

Android: £3.59 from the Play Store
iPhone: Free from the App Store

Based on an old Amiga game, this option is a little unlike the rest on this list in terms of style. With pixel art straight from the 90s, it also features a deceptively simple control scheme that is easy to learn but difficult to master.

Featuring a pick and play game style that nonetheless has some depth and which offers some room for experimentation and strategy, this is a solid option for those looking for a little challenge. It features quick play options as well as a deeper story mode through which to battle.

Not so keen on simulation? Want a little instant gratification? Stick Tennis has your number. With lightning-quick gameplay, an easy control scheme focused on timings rather than positioning and an endearing art style, it should be near the top of your list if you are a fan of tennis in any way.

This may have all the depth of Pong, but it is just as addictive.

Seasoned tennis gamers will no doubt remember the Virtua Tennis games, released by Sega for various consoles across the 00s. Featuring quick arcade-y gameplay, they were a mainstay of the genre for years - and have now made their way to mobile.

Though sporting a slightly ad-heavy model, this is nonetheless a well executed port of a classic series, offering addictive gameplay, enough challenge without being too difficult and a good variety of different courts and characters to choose from, along with well-implemented controls.

Rounding out the selection of simulation options is Ultimate Tennis. Though this option takes a slightly uncomfortable and leery approach to the fairer sex (think Dead or Alive), it nonetheless offers some depth and an engaging control scheme.

Allowing play to take place one-handed, it focuses on timing as well as positioning, and encourages the user to take the initiative in setting up counter swings. With a modern presentation, this is well worth a shot for the asking price of nothing.

Going again down the very instant route is Timber Tennis, by Digital Melody. A title which comes served with a healthy dollop of humour, this sees the player battling against fellow tennis players with balls, fireballs, bombs and more - all at a breakneck clip. Characters from previous games by the developer make an appearance too, replete with their lumber-related regalia and pixel art stylings.

Played from a top down perspective and more than a little reminiscent of Pong, this is great for quick moments on the bus or otherwise.

Not interested in instant gratification? Looking for something a little deeper, which rewards a longer look? Enter Tennis Manager.

Setting you up to guide a rookie player on their way through the ranks to reach the top of the world rankings, this title has you training your charge on a daily basis and micromanaging every facet of their existence to create a top talent.

The art style may be a little lacking, however this is a good option for those looking for a little strategy as well as something of a challenge.

Android: Free from the Play Store

Back into the world of simulation, here is another entry which offers a compelling control set along with interesting visuals and a polished UI. The key to 3D Tennis is its included physics engine, which is supposedly more advanced than the competition.

This point aside, the game itself is fun and features both a ‘Quick Play’ mode for short bouts and a ‘World Tour’ mode for those looking for a little more to sink their teeth into.

There are times when simulation, instant gratification or even management can feel a little bloodless - when what you would like to play is something with a little soul, a bit of story.

Flick Tennis, although very simple from a gameplay perspective (the title being very remarkably descriptive in this aspect) offers a full story mode, with animations, a soundtrack and a comic book narrative structure. This is a slightly offbeat entry which is nonetheless distinctive and worth a look - especially if you are in a more laid back state of mind.

Android: Free from the Play Store

In addition to being part of the initial 'big bang' of videogames in the late 70s, Pong is itself a classic if slightly abstract tennis situation whose gameplay has more than stood the test of time.

We like this version from CODA Masters in particular due to the small file size, the quick load, the minimalist interface which doesn’t try to improve on the original and the responsive controls. As a nostalgia sink or otherwise, this is a flagpole release for the tennis/table tennis genre.

In the mobile management genre, few developers have carved such an expansive niche as Kairosoft. Here the prolific game-maker has turned its magic hands to the tennis management genre, producing a title which is both addictive and hugely charming.

This is an easy option to sink hours into, especially when bored on the commute, and is highly worth a look due to its unique art style and easy to learn interface.