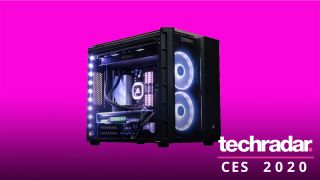 The latest addition to the Origin PC Big-O family brings in a few changes this year. Recently launched at CES 2020, Big-O is smaller and more affordable than any of its previous builds, and well, just accessible to the public in general.

Not that we’re complaining. After all, when the manufacturer released all those exciting details about Big-O in 2019, they also told us that none of the models were up for purchase. This time around, these highly coveted hybrid gaming desktops, which combine a liquid-cooled PC and a liquid-cooled gaming console in one chassis (that of the CORSAIR Crystal Series 280X), are very much available for purchase, so long as you’ve got the cash to spare. In fact, you can order one of these babies now starting at $2,499 (about ₤1,900, AU$3,600).

The Origin PC Big-O for 2020 is also highly customizable, especially its PC side, so you can choose your components – from the processor and graphics card down to the motherboard and cooling system – and build your own Big-O. Well, that is, based on the options on hand. Just know that you’ll be spending a lot more than the aforementioned price.

How exactly does this hybrid gaming desktop work?

We have yet to test the Origin PC Big-O ourselves, but according to the company, the both the PC side and the console side have separate power connections and HDMI outputs. So basically, you can use both sides at the same time, as long as you have two displays or a multiple input monitor.

You can also decide to get an Elgato 4K60 Pro capture card, which allows you to stream and capture any of your console gameplay – up to 4K – to your PC. With this Frankenstein-level gaming contraption, you’ll never have to leave your chair again.

The Origin PC Big-O may be configured to boast up to 2TB storage drive (for both PC and console), Intel Core i9-9900K or AMD Ryzen 9 3950X processor, NVIDIA GeForce RTX Titan graphics card, and 64GB of memory.