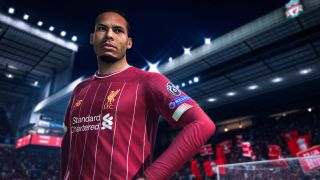 As is inevitable, we’ll be receiving another FIFA game this year in the form of FIFA 2021, or FIFA 21 depending on EA’s approach to the naming convention. FIFA 20 has been received quite well, on the whole, delivering a suite of new features and tuning up some lacking areas of the beautiful game, but there are still a few sticking points that fans will want to see improved in the next iteration.

In our FIFA 20 review we talked about how the addition of Volta, the tweaks to defending and the electric soundtrack helped it stand out after years of negligible updates, but that visually the game still doesn’t stick out year on year, and the career mode is in dire need of an update. With PES snapping at its heels gameplay-wise (and taking away from FIFA’s once-pristine licensing agreements) the two titans of soccer gaming couldn’t be closer.

So we’re going to run through everything we know so far about FIFA 21 - focusing on the potential release date, the possible cross-platform release and what we’d like to see from EA’s next entry in this legendary sports franchise. Will this year’s version put distance between PES and FIFA or bring them ever closer?

Whilst there is no set release date for FIFA 21 just yet, we imagine it’ll follow the same release schedule as previous years, which usually places the yearly FIFA game in the last two weeks of September.

FIFA 20 was revealed in June and launched on September 27, 2019, with FIFA 18 launching on September 28 the year before. We can therefore reasonably estimate it’ll hit store shelves around these two dates, so prepare your wallets, FIFA fans.

Will FIFA 21 be cross-platform?

Given that we can guesstimate FIFA 21’s release date as some time in September 2020, it’s worth considering whether the game will be cross-platform or not. The PS5 and Xbox Series X will be dropping during the holiday season (between October and December 2020), which puts FIFA 21 in an interesting milieu.

Given that both Sony and Microsoft have spoken about the importance of backwards compatibility, we can expect to see the game make the jump to the new consoles at some point, even if it's simply an upgraded digital and physical release of FIFA 21.

All we know is that it’ll most likely run better. It’s not likely EA would want to wait another calendar year to put their game on the next-gen consoles given its incredible annual popularity, so it’s fairly safe to assume FIFA 21 will make an appearance on the new consoles in some shape or form - hopefully sooner rather than later.

If you cast your minds back to the start of this console generation and the launch of the Xbox 360, you may remember that it boasted an exclusive FIFA game in FIFA 06: Road to the World Cup, so who knows, there could be something similar in the works for Euro 2020.

FIFA 20 is certainly one of the better games in the FIFA series, at least in recent memory. It added a noticeable set of systems, new modes like Volta and some clever tweaks to the in-game AI to keep things interesting, addressing the issues raised by players. Yet there’s always something else to improve in a game with such labyrinthine systems.

More street games
Whilst Volta was a great start, it’s achingly close to the incredible fun of FIFA Street, so if EA was prepared to iterate and update Volta and make it even more absurd and haptic then we're sure that would go down a storm. Integrating both the street game and the realistic football FIFA is known for would create even more value for the player in the yearly release cycle.

Improve career mode
In regards to what has been heavily requested following the previous game’s launch, players have honed in on updating the now-lacking career mode, a FIFA institution that still needs some polish. Despite the new features added in FIFA 20, it’s clear the system needs some kind of overhaul to keep it from feeling so painfully similar and lacklustre year on year.

Visual upgrades
Beyond that, it’s starting to become clear that the visual upgrades between each FIFA near the end of this console generation have become negligible, meaning that it would be great to see a meaningful change in graphical fidelity in FIFA 2021. This will most likely come as a consequence of the arrival of new consoles, which boast features like ray-tracing, better audio quality and SSDs for faster loading speeds, which will most likely be the most noticeable change.

Licensing agreements
Of course, it would be nice to see FIFA regain its licensing agreements so we don’t have to lose Juventus to PES in the next iteration, as well as the exclusive stadiums like Camp Nou that were missing from last year’s release. Ultimate Team is also becoming a growing concern with fans, more so than ever due to the transparency on pack opening odds and heat from national legal commissions around the globe that have caused quite a stir within the community.

Making the system fairer and packs less expensive would certainly afford EA some brownie points and be appreciated by its global army of players. There’s also VAR but uh… let’s not get into that. The inclusion of modern football’s most abrasive system will no doubt cause arguments and be particularly difficult to implement, but if EA is pushing for true Premier League realism, then it would make a lot of sense.