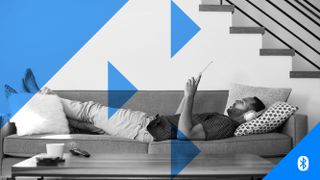 Bluetooth is the wireless transmission protocol that comes standard in millions of devices all over the globe from wireless headphones and speakers, to car audio and smart home tech, so it’s pretty significant when the Bluetooth Special Interest Group (SIG), the standards organization that develops the technology, say they’ve come up with a new technology.

Unveiled at CES 2020, Bluetooth LE Audio is the next iteration of the wireless transmission standard that uses a new codec called LC3 to improve sound quality and battery life, as well as connect hundreds of devices to a single source.

Both LC3 and Bluetooth LE will supplement traditional Bluetooth and the SBC codec and the SIG says to expect to see them on devices within the next two years.

The magic behind Bluetooth LE -  or Bluetooth Low Energy - is the LC3 codec. It’s capable of compressing and decompressing data more efficiently than SBC, which means that Bluetooth wireless chips can do their jobs without drawing as much power.

According to the SIG, audio transmitted with Bluetooth LE and LC3 even sounds better.

Because it will consume less power, it’s the perfect transmission standard for hearing aids - which the Bluetooth SIG says will soon be Bluetooth-enabled - enabling people suffering from hearing loss an easy way to connect to their TVs and mobile devices directly.

The last benefit is the ability to pair multiple headphones with a single audio source. According to the SIG, we could see airports, bars, gyms, cinemas and conference centers all have a Bluetooth channel open to the public that you could connect to. Not only does this help folks who are hard of hearing, but it also would enable these venues to transmit audio in different languages, too.

So why is this getting announced at CES? Well, because the Bluetooth SIG needs consumer electronics companies to adopt the new standard. Without adoption, none of these benefits really matter all that much.

Of course, if the past is anything to go by, not only will companies adopt the latest version of Bluetooth, but they’ll then tout features like 50% better battery life in future products without mentioning the fact that it’s only possible because of LC3 and Bluetooth LE Audio.

Only time will tell how well the standard is adopted, but given its benefits and its ability to coexist with traditional Bluetooth, Bluetooth LE seems like it should have no problem making its way into most wireless devices in the next two years.