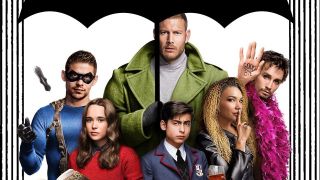 Netflix waved goodbye to its mixed Marvel shows with the final season of witty straight-talker Jessica Jones, but the streaming service still has superheroes on the brain. The Umbrella Academy swept onto the small screen in early 2019, a big-budget adaptation of the cult favorite Dark Horse-published comic series by Gerard Way and Gabriel Bá. Its radically fresh and engaging angle on superhuman fiction that immediately filled the gap left by Marvel's heroes.

Essentially a quirky, Wes Anderson-style take on a superhero story, the Umbrella Academy told the story of a dysfunctional superpowered family. The seven Hargreeves siblings were discovered by an eccentric billionaire who put saving the world over good parenting, which left lasting damage on the children.

The first season quickly made it among Netflix’s top 10 shows of 2019, and The Umbrella Academy season 2 is set to return some time in 2020. With the end of the world quite literally coming to pass in the final episode of season 1, expect an extremely different second year – and now Netflix has begun teasing the second season, meaning a release date for The Umbrella Academy season 2 probably isn't that far away...

While The Umbrella Academy season 2 was confirmed by Netflix in April 2019 and shooting wrapped in November 2019, the streaming service is yet to confirm when the show will return to our screens. The closest Netflix has come to a clue is saying it’s “Coming Soon” back in October 2019 – which, frankly, could mean any time in 2020.

Showrunner Blackman has also said it takes about 18 months to make a season, which – given that season one debuted on February 15, 2019 – would put season 2 somewhere around August. But now Netflix is teasing the series' return on Twitter, we might see it a little earlier, maybe even in March or April.

Netflix usually reveals release dates a month in advance, accompanied by a trailer, so keep that in mind as you wait.

The Umbrella Academy season 2 teased by Netflix: 'when are they?'

A long sequence of posters on Twitter have teased the coming of The Umbrella Academy season 2. It's likely a trailer and release date are imminent. The poster reads 'when are they?' Probably not long to wait now...

The Umbrella Academy season 2 story: what we expect

Right now, that’s the big mystery, because everyone connected to the show is playing their cards very close to their chests.

It’s fairly safe to say, however, that the series will pick up directly after the end of season 1, where Number Seven/Vanya (who, unbeknownst to her family, had superpowers all along) blasted a chunk off the Moon – inadvertently causing the destruction of planet Earth. The teleporting Number Five saved the Hargreeves siblings by transporting them to another time – in the process reverting them to their teenage selves.

“The truth is, we don't know where they are,” returning showrunner Steve Blackman told The Hollywood Reporter back in February 2019. “We don't know what happened to them. I wanted this to really be the best of cliffhangers, in that you're like ‘Wait, what? What happened?’ It gives us a lot of openness and legroom to tell the best story we can. But the apocalypse is not solved. They did not save the world, which is a slight alteration of the comic. To me, it was the right Netflix cliffhanger. You really want people to go into the off-season saying, ‘I gotta know what happened’, and that will be revealed when you see season two.”

All very mysterious – at least we know that the first episode of The Umbrella Academy season 2 will be called “Right Back Where We Started”.

While the TV show made a dramatic change from the comic book storyline because the Hargreeves siblings didn’t save the apocalypse, the show’s writer’s room is still using Gerard Way and Gabriel Bá’s graphic novels as a blueprint for the series. That means, there may be some clues in there – for example, it won’t be a surprise if The Umbrella Academy season 2 sees Number One/Luther dealing with depression, in the wake of revelations about his father’s decision to send him to the Moon for four years.

And Gerard Way (arguably more famous for his other job as My Chemical Romance’s frontman) is keen that the planned eight-part graphic novel arc he’s writing with Bá’s should keep setting the agenda – nobody involved wants the show to overtake the source material as Game of Thrones did George RR Martin’s novels.

And in case of emergency, Way and Bá have assembled an 18-page roadmap for Blackman and the rest of the writing team so they know where everything’s going.

What questions does The Umbrella Academy season 2 need to answer?

The mystery of Vanya/Number Seven’s apparent lack of powers may have been solved, but The Umbrella Academy season 1 finale left plenty of threads dangling still to be explored.

Crucially, we know that on October 1, 1989, 43 women gave birth simultaneously. We’ve met seven of them, but what happened to the other 36? Surely we’ll be encountering more superpowered 30-somethings in season 2.

Then there’s the mystery of Sir Reginald Hargreeves, the superpowered siblings’ adoptive dad. The flashback in episode 10, “The White Violin”, suggests he may have come from another planet, but how did he end up on Earth? And how was he so certain about the impending apocalypse that he was prepared to kill himself to reunite his kids to save the world?

We’ve also got questions about the true extent of Klaus/Number Four and Vanya/Number Seven’s powers, and how spiritual, tentacle-wielding sibling Number Six/Ben lost his life. And we’d really like to know more about The Handler and her timeline-managing Temps Commission.

Umbrella Academy season 2 cast: who's in the show

Although they’ll presumably be starting out in their teenage incarnations, the grown-up versions of the Hargreeves siblings are all back in action in season 2.

Three newcomers to the cast have also been announced – and seeing as they’re all the right sort of age to play 30-somethings, we reckon they could be members of that exclusive club of 43 superpowered sprogs born on October 1, 1989. The official Umbrella Academy Twitter account has this to say about them:

ATTENTION CHILDREN! We heard a rumor that some new friends are joining us this season. Let us welcome them.September 10, 2019

And this is yet to be confirmed officially, but the timeline-hopping storyline means the apocalypse surely won’t have meant the end for time-travelling assassins Cha-Cha (Mary J Blige) and Hazel (Cameron Britton), or their boss The Handler (Kate Walsh).

And somewhere between time travel, flashbacks and Klaus’s ability to talk to the dead, there should be numerous routes back for the deceased Sir Reginald Hargreeves (Colm Feore), the siblings’ android Mom, Grace (Jordan Claire Robbins), and chimpanzee assistant Pogo (Adam Godley).

The end of the Marvel shows on Netflix might be a blessing in disguise. Marvel Studios now controls all live-action versions of its characters, and it's seemingly pushed Netflix to adapt some more unusual superhero fiction. As well as The Umbrella Academy, the streaming service also has adaptations of comics by Kick-Ass creator Mark Millar on the way (which will be a very different proposition).

Being based on a non-Marvel comic clearly didn't hurt The Umbrella Academy's popularity at all. Let's hope we see many more seasons of it.