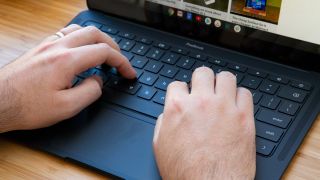 The top-tier version of Google’s Pixelbook Go is now on sale over in the US, but if you want this more powerful model – with a 4K screen – it’ll cost you more than an entry-level MacBook Pro 13-inch.

The Pixelbook Go with an Intel Core i7-8500Y processor and a 4K screen (compared to Full HD on the other models) will set you back $1,399 in the US or £1,329 in the UK. These territories, plus Canada, are the only regions where the device is available – although no Pixelbook Go models are actually on sale in the UK just yet (you can only join the ‘waiting list’ at this point).

So while the Pixelbook Go is designed to be a more affordable quality Chromebook offering than Google’s previous Pixelbook, it isn’t when you get to the high-end (and indeed as mentioned actually costs more than the base model of the MacBook Pro 13-inch which starts at $1,299 or £1,299).

Chrome Unboxed spotted that the flagship Pixelbook Go was now shipping, and indeed may have been for the best part of a week in the US, as Best Buy shows an availability date of December 7.

At any rate, whether you need the extra Core i7 oomph – compared to the other versions of the Go which run with Core i5 or m3 chips – in a Chrome OS machine is another matter. As we observed in our review, the Core i5-powered Pixelbook Go was plenty enough to cope with our varied and reasonably intense workload; but real power users may want more.

And that 4K ‘Molecular Display’ may prove more of a tempter, but again it’s arguable whether that’s really necessary for a Chromebook.

Still, more choice is always good, and if you do want the best Pixelbook Go, at least you can now actually buy it (albeit only in the US for the time being).

When it was released, we were highly impressed with Google’s Pixelbook Go: it went straight to the number one position in our article highlighting all the best Chromebooks (and even made the cut for our best laptops in the world roundup).