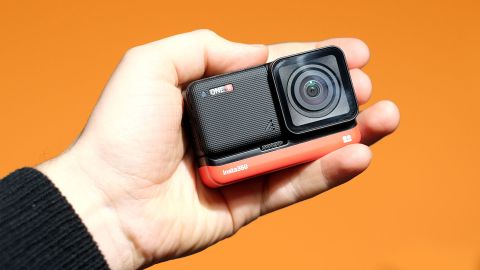 The One R is one of the most unique, ambitious action cameras we've seen – and from our early play, it looks like Insta360 might have pulled it off. Plenty more testing is required before we give our final verdict, but this modular system is far more dynamic than GoPro's, letting you switch between 360-degree and wide-angle cameras without (we hope) the quality compromise of the GoPro Hero Max. The software needs polishing with updates and the tiny screen is not ideal, but this is something genuinely new.

The Insta360 One R is a unique answer to the tricky question that's facing all action cameras in 2020 – how do you cram more tricks and shooting power into these little rugged video cams, without making them impractically big?

GoPro's answer for the Hero 8 Black is its incoming Mod accessories, which let you add a shotgun mic, bigger screen and LED light to the action camera when you need them. But Insta360, which is best known for its 360-degree video cameras like the One X, has taken an different, and highly ambitious, approach with the Insta360 One R. Yes, it's gone modular.

The One R is a modular action cam with separate units for the battery, processor and camera itself. They slot into each other, meaning a traditional wide angle lens can be swapped out for a 360-degree camera in a few seconds.

We are currently working on the full review of the Insta360 and are waiting on an updated version of the app before publishing any photos or video shot with the camera. But here’s what we think after a few days of testing this action camera.

The Insta360 One R is available to buy from today in various bundles, depending on which cameras you fancy taking on your action cam adventures.

Is the Insta360 One R’s modular style more convenient than the traditional approach of the GoPro Hero 8 Black or DJI Osmo Action? This is the primary question we have to ask of the One R.

It breaks down into three bits. There’s a block that holds the buttons, the display, mic, and the SD card, and probably the central processor. The camera unit plugs into its side, and Insta 360 sent us both a 16.4mm-equivalent wide angle camera and a dual-lens 360 unit.

You can change camera modules in about 10 seconds.

The Insta360 One R battery then slots into the bottom. There’s very little benefit to the battery being removable, particular when the GoPro Hero 8 Black’s battery compartment lets you hot-swap batteries more easily than ever. But it holds the two primary parts together.

There are some other clever elements here too. The ability to switch between standard 4K action camera, 360-degree and 1-inch sensor (an add-on we haven’t tried yet) is the headline-grabber. But you can also have the screen face towards you with the 4K camera, mimicking the vlogging skills of the DJI Osmo Action.

There is, of course, a penalty in size and shape when going modular. Just as adding more rooms to a house or flat means more space is taken up by walls and corridors, the internal design here is somewhat limited by the modular style. The Insta 360 One R is thicker and a lot wider than the Hero 8 Black. But compare it to last year’s larger Hero 7 Black and this modular design comes off very well.

The modular size tax is not huge.

You can also access the microSD card without removing the Insta360 One R from its housing. But a housing is required, unlike the latest GoPro. There are no built-in mounting fingers or tripod ports here.

No mounts or sticks are included either, but we did get a chance to try out Insta360’s One R stick. It’s a sturdy telescopic aluminum holder with good range. However, it isn’t designed with anything approaching the attention to detail of the GoPro Shorty. The tilt mechanism at the head feels clunky and it’s far too easy to loosen the connection to the camera when simply trying to extend the thing.

Insta360 cameras have lots of appeals, including more overt dynamism than GoPro. But there are some rougher parts too.

Don’t take this to mean Insta360 designed the One R carelessly, though. It is still water resistant to 5ATM, impressive when you consider the camera is modular and not huge. The rubber gaskets required for water proofing complicate any design.

Insta360 approaches the problem pragmatically. It simply treats the parts that need water resistance – the connectors of the battery and the camera module. The Insta360 has only half the waterproofing rating of the Hero 8 Black and Osmo Action. But when this means it’s just as ready for non-water-based extreme sports as the rest, we count this as a real achievement.

The Insta360 One R's screen is, however, naturally restricted by the modular style. Its maximum canvas is less than half of the rear area, and that’s a roughly a square with the same kind of area as a postage stamp.

This is a 1.4-inch touchscreen. You switch between modes and get to settings screens by flicking in various directions.

Our pre-release firmware makes the camera feed appear the wrong way around, but we expect such bugs to be fixed by the time we publish our full Insta360 One R review.

The main benefit here is one we’ve already mentioned. As the screen can be attached either way around, you can use it to compose vlog videos. And for this it’s terrific. The screen takes up almost all the free space on the front, just like the DJI Osmo Action.

Use it the conventional way and the display is, predictably, much less impressive. As this is a square screen its shape doesn’t match the aspect ratio of video you’ll shoot. There’s no 1:1 ratio mode yet anyway, just 4:3 and 16:9. This means the full area of the display is never used for the preview image.

We find it uncomfortably small for shot composition, switching from a shoot with the GoPro Hero 8 Black. This is, for now, something you’ll just have to swallow if you want a modular action camera. While Insta360 could have in theory made the display extend beyond its own module block, this would mean you could not use it front-facing as it’d block the lens.

The tiny screen also limits what Insta360 can do with the One R’s software. Basics are relayed perfectly well. You flick up to switch between the core modes: video, stills, night (stills), time lapse and time shift.

Flicking down takes you to the settings toggles. Each is represented by an icon, and you may need to dig out the manual to find out what half of them do. GoPro’s and DJI’s interfaces are clearer.

However, 95% of the time you probably won’t need to touch these and, with a careful prod, you can switch between resolutions and aspect ratios right from the standard view.

Maximum capture quality is 4K, 60fps at 16:9. If you want to use the full 4:3 sensor view at 4K, the max frame rate drops to 30fps. Curiously, 30fps is the only frame rate you can use at 4:3, regardless of resolution. Again, this may change with a firmware update.

With current pre-release firmware the feel of the interface is not up there with those cameras either. It doesn’t have the same sense of consistent inertia thanks to lower-quality animations and an annoying tendency to skip straight past modes as you flick through them. But hopefully this will improve.

The Insta360 One R also tends to glitch out when you use the 360-degree camera, although the ability to pan the preview with a touchscreen swipe is a nice touch.

We will also have to leave all our image quality conclusions to our full review, which will be published soon.

Currently, the Insta360 One R makes you filter all your footage through the Insta360 Studio application (or a companion app, which wasn't available at the time of writing) and this desktop software crashes as soon as you try to import clips to it. Your clips use the proprietary “INSV” files rather than MP4s, adding an extra step to your workflow.

There are some interesting points to note, though. Right now, the One R relies on external software to provide its FlowState stabilization. Insta360 says it is currently working on getting the job done in-camera, but for now at least it is “cheating”. HDR is already processed in-camera, though, and there’s a dedicated HDR video mode.

You don’t get any choice of fields of view, although the 2.7K mode has a cropped view, suggesting it may be based on the 4K feed. You could use it in place of the GoPro’s multiple view styles.

A few important questions remain here, including how effective the Insta360 One R’s “Auto editing” 360-degree footage feature will be. Ease of editing is one of the GoPro Max’s strengths, and if it’s not effective the appeal for those who don’t use proper video editing software will drop off significantly.

Of course, it’s likely to be just the same as that of the other 360-degree Insta360 cameras – the company is no 360-degree newcomer – which is among the best around in that space.

The One R also has an important benefit over the DJI Osmo Action. It can encode using either standard H.264 format or the newer H.265, which offers better image quality per megabyte of storage used. GoPro only added this support in 2019’s Hero 8 Black, so Insta360 is up-to-date here.

We are also intrigued by the add-on camera module, one with a one-inch sensor capable of 5.3k resolution capture. It doesn't come cheap, but should provide superb image quality when paired with Insta360’s FlowState stabilization.

The Insta360 One R is one of the most dynamic action cameras we’ve seen in a while. Modular phones like Google Project Ara have been non-starters, but the concept makes more sense here, and Insta360 has largely pulled it off.

This camera is not radically larger than a standard action cam, you don’t lose out on water resistance entirely and switching lenses barely takes any time at all.

In our full review we’ll put the One R head-to-head with the GoPro Max. It can act like a standard GoPro or a 360-degree camera with the touch of a virtual button, with a hit to image quality compared with a standard GoPro.

But does the dedicated 4K 16mm camera here beat the Max soundly enough to make up for the small screen, less friendly interface and limited field-of-view flexibility? We’ll find out soon.