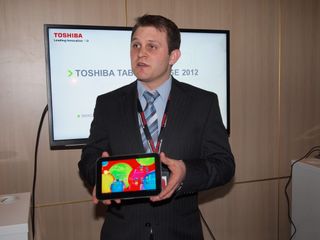 While TechRadar saw some Toshiba concept models at CES 2012, they were in nasty glass cases. We've now had the opportunity to actually properly check out prototypes in our hands.

First up is this 13.3-inch monster tablet. It wasn't functioning when we saw it, but we bet it would look damn good with Windows 8 on board.

However, Toshiba's Paul Hicks was coy on the issue, suggesting "no decision" had been made about which OS would potentially power the potential tablet. Which leads us to believe that potentially it will have Windows 8. See?

However, a 13.3-inch tablet seems like overkill. It's basically a laptop to us – and we reckon that with touch-enabled fold-over Ultrabooks only just around the corner it can only be a matter of time before we'd love one of those instead.

The other concept is a lot more interesting because it looks closer to market. It's a 7.7-inch device with AMOLED screen. Yep, rather similar to the Samsung Galaxy Tab 7.7 we saw at IFA 2011 last September - though that was a Super AMOLED screen rather than just plain AMOLED.

The colours on the screen looked superb and, while we weren't as instantly impressed with it as we were with the Galaxy Tab 7.7, we think it's got legs. It runs Android 4.0 Ice Cream Sandwich, naturally.