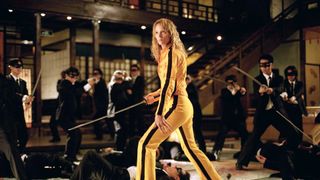 Kill Bill 3 may enter production within the next few years, if recent comments by series director Quentin Tarantino are anything to go by.

As reported by our sister site GamesRadar, the Django Unchained director isn't letting sleeping brides lie, with plans in the works for a third instalment in the famed Kill Bill franchise, which saw Uma Thurman don her yellow jumpsuit and katana sword in a whirlwind tale of vengeance against her former lover.

Speaking to a reported from SiriusXM, Tarantino said the movie was "definitely on the cards", saying "I do have an idea about what I would do."

He clarifies, though, that it would be "at least three years from now" before we caught any sight of the film. Whether that's the start of production or a theatrical release date is unclear, but the upshot is that Kill Bill 3 isn't at the top of Tarantino's to-do list.

Why the delay? it appears the screenwriter-director has scripts planned for a stage-play as well as a little something for the small screen: "I’ve written a play. I’ve written a five-episode TV series. I’ve kinda written what I’m going to do for the next three years.”

While there's no clue as to the content of the TV series, the five-episode season is likely to gain a lot of attention as and when it lands. Given the filmmaker's prior relationship with Netflix – with Tarantino having turned his movie The Hateful Eight into a four-part miniseries for the streaming service – we think that's a likely (if speculated) destination for the project.

Kill Bill 3: what to expect

While we (spoilers ahead!) got closure of a sort at the end of Kill Bill 2, with the man himself toppling dead and The Bride's daughter safely recovered – and seemingly all of The Bride's enemies out of the way – there's still plenty of potential for the franchise going ahead.

Given the amount of time that's passed, we reckon a new movie may focus on the daughter, with a Quentin Tarantino spin on 'young girl assassin' properties like Amazon Prime Video's Hanna, or X-23 in the X-Men spin-off Logan.

Tarantino does tease that he “just so happened to have dinner with Uma Thurman last night,” meaning a reappearance of the franchise's original protagonist seems highly likely in any continuation of the movies. With Bill now deceased, though, could Tarantino really call the movie Kill Bill 3?