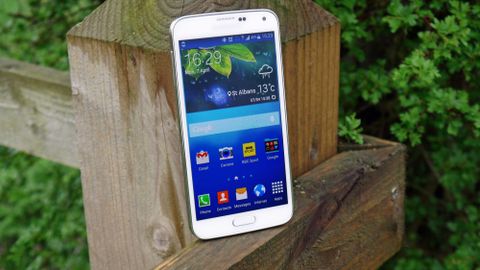 Powerful, competent and a decent UI at launch, it's still a risk buying such an old phone even though the price is much lower.

Update: Looking for an affordable S5? Check out our curated selection of the best Samsung Galaxy S5 deals.

The Samsung Galaxy S5 can be defined by one word: evolution.

The camera was evolved to give clearer, faster snaps. The fitness-tracking abilities of the S5 are enhanced over the Galaxy S4 by packing in a more powerful S Health app and a dedicated heart rate monitor on the rear. A fingerprint scanner adds to the most secure Galaxy phone ever made.

The battery is larger, the screen bigger and brighter, the processor quicker and the design altered.

The spec sheet certainly doesn't let it down: a 2.5GHz quad-core CPU, 2GB of RAM, a 2,800mAh (removable) battery, 16 / 32GB of memory (with up to 128GB extra through microSD), one of the world's most vibrant screens that's been extended to 5.1-inches and added biometrics.

However, it's hard to point to one stand out feature that will grab the prospective user when they handle the Galaxy S5 for the first time.

And now it's been in the market for a long time, and most places aren't even stocking it thanks to the fact the Galaxy S6, Galaxy S7 and now, the Samsung Galaxy S8 have emerged to take the mantle of flagship from Samsung, and both offer a much better experience and design.

If you're thinking of still picking the Galaxy S5, it'll set you back £190 in the UK, with the refurbished or second hand markets the place to get your hands on it.

It'll be about $220 for the same thing, and AU$350. It's a pretty woolly place out there when it comes to buying the Galaxy S5 as most places are running out of stock, so you'll be advised to shop around.

The thing is, it's packed with much older tech than other phones that cost the same, and it won't be getting an Android Nougat, nor will it receive Android Oreo, thanks to phones powered by Google's OS having a much shorter software upgrade cycle.

So really think about buying something like the OnePlus 3T instead - you'll be glad you've got something a bit newer.

OK, let's get back to the original review. The phone does still have a lot going for it for the budget-minded and there are some things to consider if you're going for the older model.

The messaging around the launch of the Galaxy S5 was that Samsung had listened to the consumers and dialled down the gimmicks, focusing instead on what makes a phone special to the consumer.

It promised a 'fashionable' and 'glam' design, a camera that works in the way you'd want it to and strength through being water resistant.

There's also the small notion of an improved version - I was told that it was very likely the Galaxy S5 was going to launch with a Samsung Galaxy S5 Prime version in February, with oodles more RAM, a faster processor and QHD screen on board.

However, that was pushed back (likely to do with issues in creating the screen in high enough volumes) and has since appeared in the South Korea-only Samsung Galaxy S5 LTE-A version. This one has a Snapdragon 805 CPU, a WQHD screen and all the high end features you can wish for. In short, it's the amazing phone I wish Samsung had announced originally and sold all over the world.

You can always look at the Samsung Galaxy Alpha, a smaller phone with equal power to the main Galaxy S5, but with a lower-res 720p screen. That's offset by a metal design, although only around the edge of the phone - and Samsung has gone once again for a light weight, rather than making it feel weighty and ergonomic in the hand.

That phone has a premium design fused with power under the hood - but with a sky high price and the lower-res screen.

And if you want something a little smaller, then the Galaxy S5 Mini is still available in some places as well. It's a lot like the bigger brother, and the specs have only been dialled down slightly. It's not quite got the raw power but the design aesthetic is there and the heartbeat monitor as well - well worth checking out if you don't want to spend as much.

But enough of the competition: let's look at one of the key questions that Samsung needed to answer with the Galaxy S5: is it good enough in market that's becoming saturated with decent high-end handsets?

The simple answer, from the second you hold it in the hand, is no – because the design simply isn't up to the same level as the likes of Apple and HTC.

That's only a small part of the story though, and underneath the hood Samsung has continued its play of stuffing all the latest specs in and optimising them in a way that doesn't suck down oodles of battery.

Was this phone good enough to keep Samsung fighting with Apple at the top of the sales charts? Yes, but that's mostly through the impressive marketing machine that rolls out in every territory - and even that hasn't led to the greatest sales for the new phone.

This seems to have been picked up by the market at large given that Samsung recently reported that it has sold around 40 per cent fewer S5 handsets than it did with the Galaxy S4 at the same point in its lifecycle.

The South Korean giant has responded to the news by stating that it plans to take a closer look at its smartphone strategy and concentrate on price tiers rather than high end handsets.

Critically, and for the purposes of this review, it feels like there's very little to shout about with the Galaxy S5 – but perhaps that's no bad thing for a brand that was accused of bringing pointless innovation with last year's model.