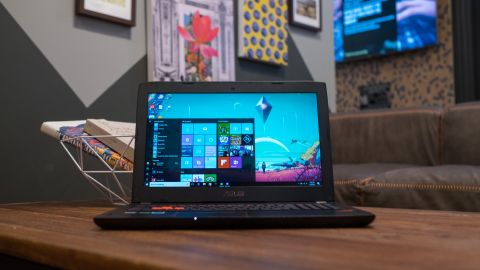 Asus' first Strix-branded laptop is a Full HD gaming rock star complete with an amazing screen and booming speakers to bring the noise.

In the world of the best gaming laptops, we’ve seen a ton of competitors like the Razer Blade and the MSI GS65 Stealth all vying to create the thinnest gaming machines. The concept of the gaming laptop that’s thin and light enough to travel with is extremely compelling. And, for years, we had to compromise in power to get a portable gaming machine.

Those days are over now that the Asus ROG Strix GL502 has arrived. It’s one of the first ultra-light gaming laptops that managed to find a balance between power and portability. With its 1.2-inch frame, this 15.6-inch laptop comes loaded with an Nvidia GeForce GTX 1070 and 8GB of VRAM – a graphics card that used to be exclusive to hulks like the Gigabyte P57X.

Beyond its raw components, though, the Asus ROG Strix GL502 delivers on all fronts with a colorful screen, various inputs – and flashy aesthetics, making it one of the best Asus laptops, gaming or otherwise.

Asus has slowly been edging its way away from the done-to-death black and red color scheme found on most gaming laptops. Instead of crimson highlights, the GL502 has orange trim accenting its black paint job. It's not a grand departure like the titanium and copper design found on the Asus ROG GX700 and ROG G752, but it's a start.

Though, we almost wish Asus would have stuck to the purely black and red motif, as the keyboard backlighting is still red.

Aside from the new paintjob, Asus has seriously upped the profile of this machine with a new look that's in line with the rest of its ROG series. Whereas the Asus ROG G501 closely copied the MacBook Pro look, the GL502 stands on its own with an attractive and aggressive design.

Brushed aluminum screen lids are fairly common on gaming laptops, and so, you'll also find one on this Strix machine. But, the GL502 also features an extra flat edge stamped with the Republic of Gamers tagline.

The rest of the chassis is made out of plastic, which might seem disappointing at first, but it feels solid as any full-metal gaming laptop. What's more, Asus has given the keyboard deck a similar brushed finish to its top lid, while the underside carries a mechanical design etched into the panel.

There's a load of branding here, between the Strix logo cut into the keyboard deck and Republic of Gamers featured prominently on the top and bottom of the laptop, but you can't deny that there isn't a single boring side to this 15-inch beauty.

Beyond looks, the Strix's largely plastic exterior also helps keep weight down to a mere 4.9-pounds (2.22kg). To put that in perspective, it's more than a half pound heavier than the Razer Blade and MSI GS60 Ghost Pro but the Strix features higher-spec parts. Still there are heavier 15-inch laptops like the Alienware 15 and the 5.29-pounds (2.4kg) Gigabyte P35X v5.

Ultra-thin gaming laptops haven't been the coolest of customers. More often than not, they either get excruciatingly hot, moo like a cow with loud fans or end up throttling components to stop the whole machine from melting itself down. Asus is the first company to make sure its svelte gaming machine is adequately cooled without any of those downsides.

On the rear edge of the GL502, you'll find two thick heatsinks, and they're not just painted orange for show. This large exhaust system pushes out a constant stream of air hot enough it could double as a space heater. Internally the laptop features Asus' new 'dual thermal design,' which runs two separate lines of copper heat pipes and fans to cool the CPU and GPU individually.

Thanks to this efficient cooling system, the GL502 never really gets toasty on your lap, and the fan noise doesn't get too rowdy either. Heck, you might even find a use for all the hot air coming out the back to keep your coffee hot.

Next Page Value, performance and features