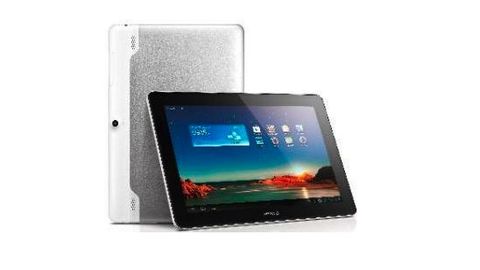 Vodafone made a big song and dance about its 20MHz of contiguous spectrum when it launched its 4G network earlier this year. But talking the talk and walking the walk are two different things, and Vodafone is hoping to use the MediaPad 10 Link tablet from Huawei to do the latter.

So far, Cat 4 mobile devices are few and far between in Australia, and Huawei is leading the charge with this tablet and its Ascend P2 smartphone. But with Telstra locking up the P2 as a timed exclusive, Vodafone opted to do the same with the MediaPad 10.

But whether the Huawei tablet has the brand recognition or the power to tell Vodafone's Cat 4 story is yet to be determined. Promising theoretical download speeds of up to 150Mbps over Voda's 4G network, the MediaPad has plenty of potential.

The tablet, which is available on $35, $45 and $60 plans from Vodafone from mid-August, has plenty going for it on the spec sheet. Running Android 4.1, it touts a quad-core 1.5GHz processor alongside its 6400mAh battery and 10.1-inch IPS LCD display.

In the hand, the device itself looks like a sideways iPad. The screen and bezel, while boasting a different aspect ratio to Apple's tablet, is still eerily reminiscent of the original modern-day tablet.

The main differences from the front though are the lack of any physical buttons, and the fact the front-facing camera is located on top of the tablet when held in landscape mode rather than portrait. The Huawei logo on the bottom of the screen is the other big giveaway.

The bottom of the tablet tells a different story. The 3MP camera protrudes from the plastic casing, while grills show the location of the tablet's speakers.

On the right side of the device is the power button and volume rocker, while the left side houses the headphone jack and micro USB connector. On top, a flap hides the expandable memory and full-size SIM card slot.

From our early hands on, the tablet is quick and responsive, with Jelly Bean singing on the processor.

We haven't put the tablet through its 4G paces fully yet, but preliminary tests are positive. After half a dozen speed tests from our office in North Sydney, we're getting average download speeds of around 60Mbps.

That's a far cry from 150Mbps, but still significantly faster than most ADSL connections.

Huawei has preloaded the tablet with a few of its own apps, while Vodafone has snuck its My Vodafone app on there as well. There's still 12.83GB out of 16GB available out of the box though, which should be plenty for most people to get started with before needing to upgrade through expandable memory.

From a hardware perspective, the MediaPad certainly feels robust enough, and flicking through menus is fast and speedy.

We've only just begun scratching the surface of the Cat 4 nature of the tablet, but the download speeds are consistently pretty high. Not crazy high, but high, which is pretty enticing.

But is it enough to convince anyone to not buy an iPad 4 or an Xperia Tablet Z? We doubt it. But we'll leave our final decision until after we've tested the MediaPad's 4G skills.