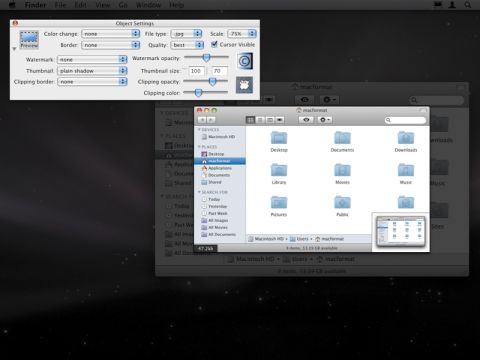 Pricey, but great for video capture. Stills capture could do with some changes, though

But Snapz Pro X bills itself as the crème de la crème of such tools, and is aimed at professionals who've outgrown Apple's built-in freebies.

A step above the rest

Since us journo types take hundreds of grabs every year, we're ideally suited to putting Snapz Pro X through its paces, and it comes out smelling of roses, albeit roses with a bit of dung on the stem.

For movies, Snapz Pro X excels. On our test machines (a year-old MacBook and a decked-out Mac Pro), full-screen movies were recorded with no apparent loss of frames.

The number of capture options is impressive, offering a fixed camera or one that follows the cursor, various framerate and scale options, and the ability to capture audio. The preview screen is also handy for sanity-checking your settings.

When the movie's done, plentiful encoding options are made available, although obnoxious sound effects ('Action!', 'That's a wrap!') and the inability to pause movie captures take the edge off perfection.

When it comes to stills, we're less impressed. Yes, Snapz Pro X offers loads of settings when capturing a screen, object or selection (including watermarks, file types, and options for scale, clipping, borders and colour changes), but the lack of timed grabs is a pain, and its inability to grab Mac OS X's drop-shadows is irritating.

The slightly awkward interface is also old hat. The zoomed-in FatBits window is useful, however, for ensuring selections are just right.

Overall, Snapz Pro X is great (if a tad on the pricey side) for capturing video, and not bad for nabbing stills, although occasional screen-grabbers are probably better off saving 15 quid and using Mac OS X's built-in capabilities instead, which work just as well.