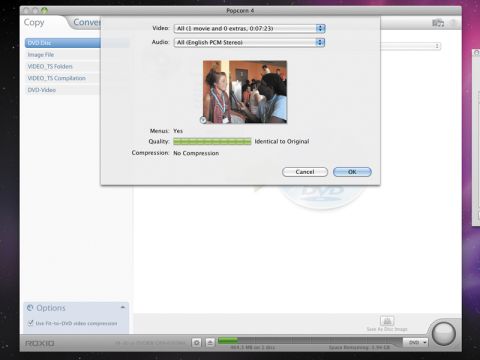 Popcorn 4 has a handy media browser for grabbing files quickly

There's nothing wrong with Popcorn 4, but free alternatives do exist

One of the hallmarks of a good business is its ability to release products with a unique selling point. If your USP is very niche or borderline useless, it won't win over potential users. Unfortunately for Roxio, Popcorn 4's unique feature suffers from this fatal flaw.

But first, let's be clear on something: Popcorn itself is not useless. In its more common functions – video conversion and DVD copying – it's fairly good.

The interface is handsome and accessible, though there is one inexplicably poor design decision: the button that starts the processes isn't labelled.

However, once you've figured out it's the blank red circle, you'll find that Popcorn has a couple of other useful tricks up its sleeve. You can schedule conversions to happen when you're not using your Mac, or pause the process if you need to free up your Mac's resources for a while.

What about those USPs then? Well, Popcorn is able to fit 9GB of information on a 4.7GB disc. We can imagine times when this could be useful, but it's surely not a common need.

The seemingly useless feature we alluded to, however, is conversion support for TiVo recordings made on branded DVRs. During our review period with Popcorn, Virgin Media announced that it was joining up with TiVo for new set-top boxes, so maybe Roxio are just miles ahead of the curve here. But somehow we doubt it.

The real issue, though, is one of value. Unless one of Popcorn's features is really worth £35 to you, we'd go with the free Handbrake.