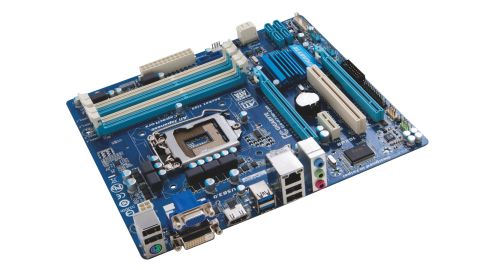 A more budget oriented H77 for those with simpler needs

We're pretty familiar with Intel's maxed-out Z77 chipset. But the new Gigabyte H77M-D3H is one of the first motherboards we've played with to sport the H77 chipset.

You can get a broader overview of the of the Intel H77 in our Asus P8H77-M Pro review, but the elevator pitch involves lower pricing in return for a few less enthusiast features while maintaining the key home theatre-friendly multimedia moves.

As for the Gigabyte H77M-D3H itself, we're talking a motherboard for movie-playing PCs with a budget twist. So that means a MicroATX form factor rather than full ATX.

Gigabyte has also taken the knife to a few of the choicer features you might expect to find on a home theatre motherboard, and the result is a somewhat barebones - if competitively priced - option for getting in on the Intel 7 Series action.

The competition takes the form of existing H67 boards, many of which are at least theoretically compatible with the latest Intel Ivy Bridge processors, and all the other H77 motherboards that are currently popping up, including the new ASRock H77 Pro4/MVP, which provides a full-ATX option.

As motherboards with hot new chipsets go, at £75 in the UK and $100 in the US, the Gigabyte H77M-D3H is pretty affordable. So we'll forgive it's tail-end placing in our motherboard benchmark test.

In truth, the gap to the more expensive Asus P8H77-M Pro isn't anywhere near big enough to ever notice in practice.

The same goes for any Z77 board you care to mention, including the Asus Sabertooth Z77, which is one of our favourites. However, like all of the new Intel H77 boards, it's worth noting the Gigabyte H77M-D3H is not remotely overclocking friendly. That probably limits its appeal beyond cheap all-purpose rigs and home movie setups.